Choosing the right CPU, GPU, or even SSD could be considered difficult – but so could simple peripherals, such as an HDD enclosure. These seem to be a dime a dozen, and while many consumer purchases may boil down to aesthetic value, we’ve discovered with Zalman’s ZM-HE350 U3 that not all external enclosures perform alike.

“The golden age of home computing” is a phrase that I use quite frequently to describe the current state of the computer hardware market. Those keeping tabs on the hardware scene over even the last five years have watched as the price of systems and components have dropped to record lows, while technology has streaked forward at break-neck speed.

Powerful systems can be built for under $1,000, while solid-state drives are finally becoming affordable. Hard drives now have densities that were unimaginable and new interfaces, such as USB 3.0, can transfer large files faster than ever before.

To help prove this last point, I am taking a look at Zalman’s ZM-HE350 U3 external hard drive enclosure. Until USB 3.0 enclosures came to the market, I had no interest in owning an external drive. To me, they were slow and the benefit of a larger capacity over flash drives was offset by the speed limitations of the interface. But after finally breaking down and picking up a USB 3.0 model a few months ago, I am a believer! Will Zalman’s offering help keep the faith, or break it? Let’s check it out.

The enclosure will accept any standard 3.5″ SATA 1.5Gbps, 3Gbps or 6Gbps drive with the latter being scaled back to SATA II speeds. Being USB 3.0 capable, it is also backwards compatible with USB 1.1 and 2.0 interfaces. This means those who do not have the latest and greatest USB technology are still covered. With USB 3.0 providing a theoretical maximum throughput of 5Gbps, there should be no restrictions on transfer speed.

The main body, which makes up the top, bottoms and sides, is painted aluminum while the ends are capped in with plastic. Each side features the Zalman name and slogan. Down the left side of the front cover are three, blue LEDs that indicate power, hard drive activity and USB connectivity. 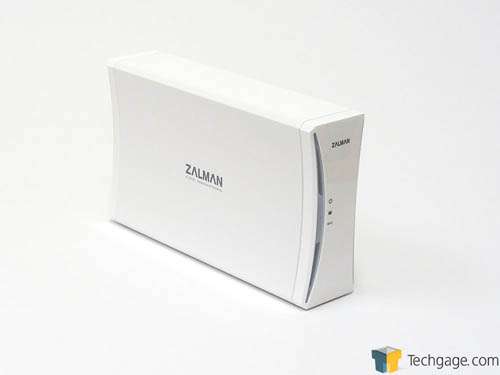 Around the back, from top to bottom, are the USB connection, rocker power switch and the AC power adapter connection. Between the USB port and power switch there looks to be an area for an additional connection, evident by a rectangular outline. This is for the e-SATA connector available on Zalman’s other model, the ZM-HE350 U3E. Rounding out the back are the screws, one in each corner, which need to be removed before the internals can be accessed. 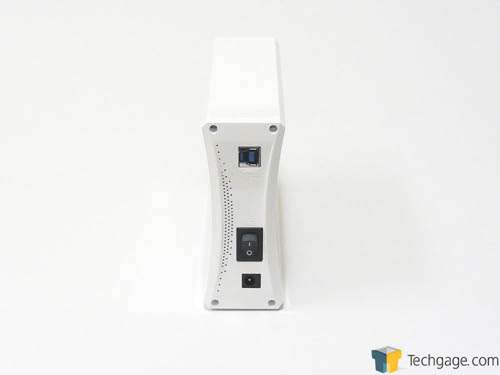 The bottom is very simple with two rubber strips to protect the surface where the enclosure sits, at the same time stopping any slipping or sliding should the unit be bumped or the cables pulled. 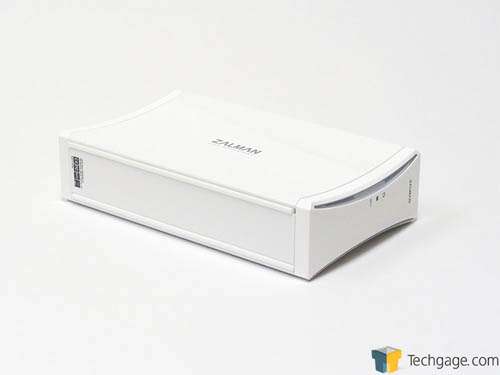 As the saying goes, it is what is on the inside that counts. Removing the four screws from the back and pulling out on the plastic reveals the PCB, which the hard drive is mounted on. The main item to focus on is the JMicron JMS539 bridge controller on the left side of the PCB. This chip acts as the go between for SATA and SuperSpeed USB commands. I won’t go into specifics but if any readers would like to satisfy their inner geek, all of the data can be found on JMicron’s website. 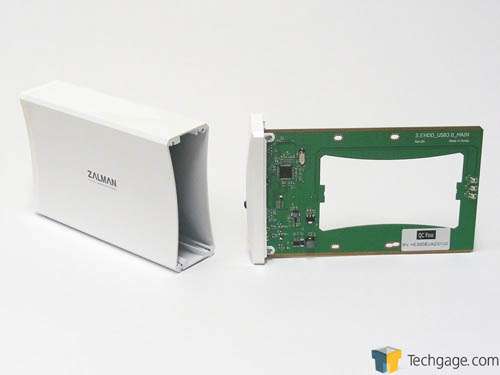 The included hardware is sparse, but nothing else is really needed. A welcome inclusion is a small screwdriver for those who may not have the necessary tools on hand, four mounting screws used to secure the hard drive, a USB 3.0 data cable and the AC power adapter. Instructions are also included for a brief but thorough walkthrough on how to install a drive and use the enclosure. 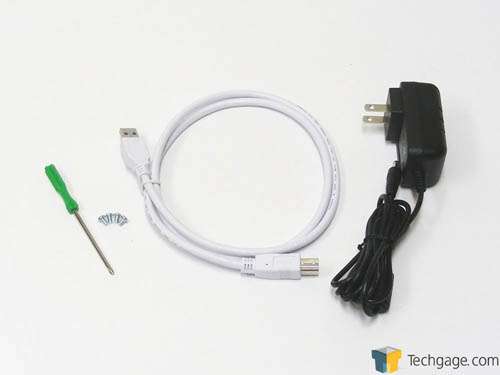 There’s no use buying a product if it isn’t easy to use and doesn’t perform well so it’s time to get our hands dirty, so to speak.