Choosing the right CPU, GPU, or even SSD could be considered difficult – but so could simple peripherals, such as an HDD enclosure. These seem to be a dime a dozen, and while many consumer purchases may boil down to aesthetic value, we’ve discovered with Zalman’s ZM-HE350 U3 that not all external enclosures perform alike.

Installation of the hard drive could not be simpler. Just lay the drive on the PCB, line up the combined SATA/power header with the connections on the drive and slide it into place. Our Western Digital 2TB Green test drive had no problems at all. 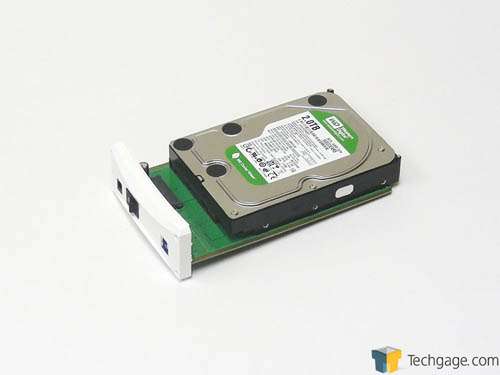 Instead of securing the drive from the sides, as is the case if the drive was being installed into a chassis, the drive is secured from the bottom through holes in the PCB using the four included screws. Once done, slide the assembled internals into the enclosure and tighten the screws on the back. That’s all it takes. 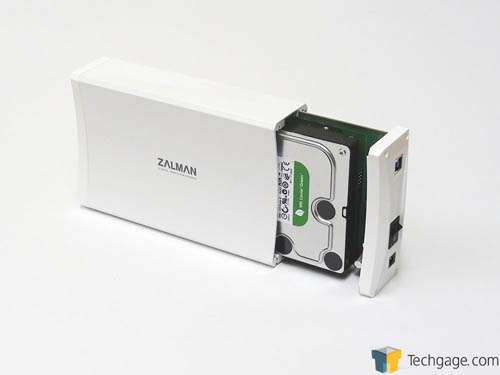 When powered on, the LEDs on the front give off a subtle blue glow on both sides that flickers when the drive is being accessed. 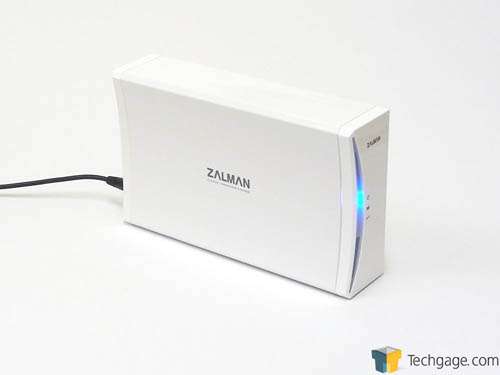 Read and write tests were both run twice run using HD Tune Pro 4.6 to ensure consistent results. They were run in two configurations; one with the hard drive installed in the enclosure while connected to a rear I/O USB 3.0 port and again with the drive installed into a chassis connected directly to a SATA 3Gbps header on the motherboard. The results were recorded and the average listed in the below.

The components of the test system are: 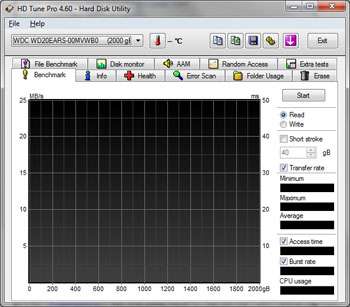 For our tests with HD Tune, we use the “Benchmark” feature since any further testing would be overkill based on what we are hoping to find. From the Benchmark section, we gather the average results, and also the access time. The final piece of data is the drive temperature to see just how well the aluminum enclosure can dissipate heat. 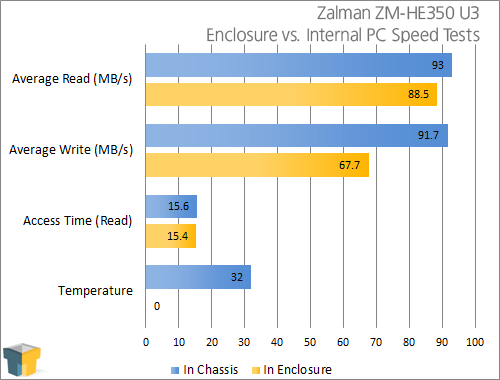 Read transfers are pretty much in line with each other regardless of how the drive was installed. Only 5.5MB/s difference in favor of installing it in a chassis. Looking at the write transfers paints a different story with 24MB/s difference. This adds up to something, somewhere within the enclosure causing performance to be affected. The access time is also quite close, meaning there does not seem to be any explanation for the low write results that I can see.

Recording the temperature was also an issue while the drive was installed in the enclosure. HD Tune Pro could not read it, nor could AIDA64. In fact, AIDA64 was unable to read any SMART data at all. Rob tested an identical drive in an enclosure from a different manufacturer and could monitor the temperature without any problems. When installed in the chassis, the drive stayed at a cool 32 degrees Celsius but when the drive was removed from the enclosure after two read and write sessions, it was quite warm. Since this enclosure relies on passive cooling, I would be cautious of what drive is chosen since excessively high temperatures could shorten the lifespan.

As a bit of an afterthought, I checked the bridge controller being used in my daily driver USB 3.0 enclosure and found it to be the same model, so I am stumped on where the problem lies.

Since something just isn’t adding up, we have gone back to Zalman to see if the folks there can shed any light on the write discrepancies and the temperature monitoring issue.

With the eye candy and number crunching out of the way, it’s time to pack this one in.

So what question do you initially ask after reading a review? Is the product worth my hard-earned dollars? Exactly. In this case, the answer is yes and no.

Even though I’m not a fan of white, the enclosure looks great. Installation was a snap and it’s plug and play with no need for drivers – meaning anybody can use it. On the flipside, it clearly has some problems. Write speeds are somewhat crippled and a lack of SMART support is disappointing as is the cooling capability. Seeing how the enclosure is passively cooled, higher temperatures are to be expected. And at ~$49.99 USD (this is tentative; the official release is slated for mid to late spring), we’d expect at least a couple of those things.

At the end of the day, I’m not ready to slap an Editor’s Choice award on this one but the enclosure does get the job done. Just not as well overall as others I’m afraid.