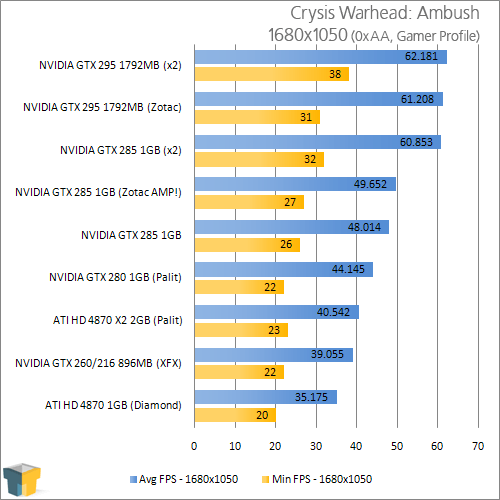 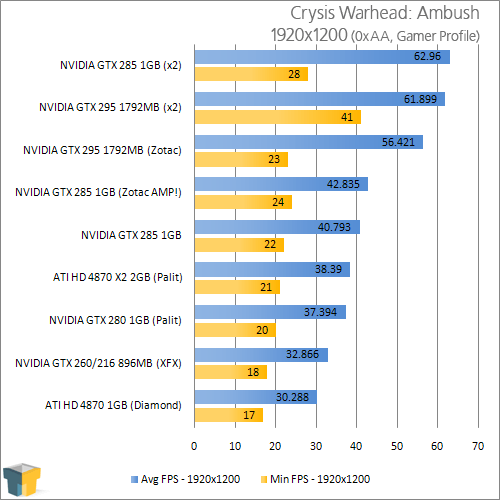 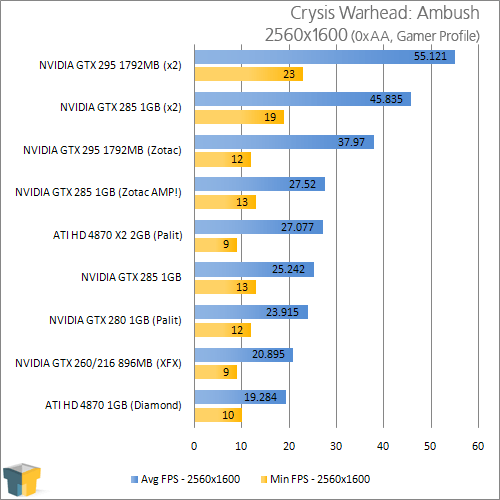 Only Crysis has the ability to prove to you just how inept that expensive graphics card of yours is, and it does a great job of that. Surprisingly, even with two GTX 295’s at 2560×1600, we were still barely able to tap the 60 FPS mark, and that’s without even a pinch of Anti-Aliasing! From a 1680×1050 perspective, any card will play the game just fine with the Gamer Profile, and for the most part, not much changes at 1920×1200.

Our top resolution of 2560×1600 is a far different story, though, as only three of our GPU configurations delivered enough power to be able to run the game at above 30 FPS, a range that I personally find suitable for normal gameplay. Even 30 FPS isn’t ideal, but I don’t think the performance is low enough to keep people away from enjoying improved visuals.

It’s pretty clear here. To enjoy this game at the Gamer setting without moving to an SLI setup, the only choice right now is the GTX 295, which came close to offering 40 FPS on average. Zotac’s AMP! GTX 285 came close to the 30 FPS we’d like to see, but no cigar.

For the first time, we’ve finally seen a GPU configuration that would allow the Enthusiast setting at the ultra-high resolution of 2560×1600. Granted, it requires two $500 GPUs, but the fact that it can be done is impressive. The 42.507 FPS being delivered sure isn’t jaw-dropping, but it’s plenty-enough to deliver smooth gameplay at oh-so-gorgeous settings.

From a single-GPU perspective, the GTX 295 once again offers the best bang for the buck where quality and average FPS is concerned. SLI’d GTX 285’s improve upon that result by about 7 FPS, but $300 would also be tacked onto the cost-of-entry, so there’s a definite trade-off. Where the GTX 285 is concerned, it has easily become the fastest single-card single-GPU offering available today, and this table proves it. Sadly, at 2560×1600, the profile had to be kicked down to Mainstream, but for 1920×1200, the Gamer profile can be used just fine for any of the cards listed here.