A Look at Steam’s Hardware Survey for April 2013

It’s been a couple of months since we last checked in with Steam’s hardware survey, so let’s do some catching up, shall we? In our last look, Steam’s official support for Linux launched mid-month, so our stats overall were less-than-ideal, but now, we can finally see where things stand now that the dust has settled. In addition, this report encompasses the entire first six months of Windows 8’s existence.

Sorting through the Linux entries in the survey is a bit tedious on account of the fact that it explodes all of the distros to categorize them on a fine-tuned scale. There are twelve entries for Ubuntu, for example, making me wish just a little bit that Valve would group most of them together, based on whether they’re x86 or x86_64. But since that’s not the case, let’s dive in.

Among all of the Linux entries at the moment, the total amounts to 1.52%. Ubuntu’s 12.10 64-bit edition leads the pack with a 0.35% share, with the 12.04 LTS trailing behind with 0.23%. Not surprisingly, Ubuntu dominates the Linux list, with the first five listings belonging to it. Moving down the ranks we see a decent share for Linux Mint (0.17%), with other distros including Gentoo, Fedora, Manjaro, elementary OS, openSUSE, Arch and Chakra. There are many Linux entries at 0.00%, so it’s likely that the actual total is a smidgen above 1.60% – but the difference would still remain insignificant. 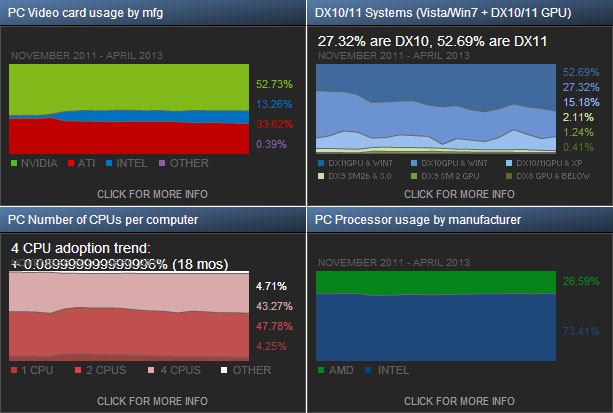 In the Linux vs. Mac battle, the latter wears the crown. Across all of the MacOS versions recorded, the total share is 3.40%, with the top version not surprisingly being the most recent, 10.8.3 64-bit, capturing a 1.56% portion of the pie.

With our last look at the survey, I seemed to be a little too preoccupied with Linux’s introduction to acknowledge Windows 8, so let’s do that here. At the end of January, its usage share totaled 9.10% – a rather impressive stat given its release occurred only three months earlier. As of last month, that total increased to 11.65%. Hardly stark growth, but growth nonetheless. A mere 0.79% of this is thanks to the 32-bit edition, so a big *thumbs up* to those 64-bit adopters.

I’m all OSed out, so let’s look at other aspects of the survey, such as my favorite: resolutions. The 1080p resolution continues to reign supreme here, which isn’t a surprise given current display prices. It currently hogs 30.73% of the total share, with an increase of 0.76% month-over-month. Second place remains with the resolution made popular by notebooks, 1366×768. It captures 21.09% of the share, while third place goes to the old-school 4:3 resolution of 1280×1024, with 8.49%.

Of all these multi-monitor resolutions, a couple listed at the end are nothing short of jaw-dropping. 7680×4320, anyone? Forget 4K resolutions – that one is a staggering 33 megapixels, large enough to view a 30 megapixel image at normal size (aren’t I creative?).

Interestingly, the latest top graphics card doesn’t belong to either AMD or NVIDIA, but rather Intel, with its HD Graphics 3000. In fact, Intel owns 4 of the top 6 positions, made slightly easier by the fact that its competitors offer a ridiculous number of models in comparison. In total, Intel owns about 11% of the chart, with NVIDIA hogging most of the top spots that Intel doesn’t. Because there’s such a spread of GPU usage here, it’s hard to call any card or vendor dominant. The top card holds 4.17% share, while #5 brings us to below 2%. Having selection is a great thing, but it sure makes reports like this difficult to draw conclusions from!

With that, feel free to peruse the survey on your own for greater detail, and while on the Steam subject, let me take this opportunity to con you into joining our Steam group. All the cool kids do it, and unlike smoking, we can’t cause cancer*.

*This has never been verified.