When I learned of Linux Deepin about a week ago, I jumped to the conclusion that it was just “another Ubuntu derivative”. As it turns out, I was way off-the-mark. While Deepin is based on Canonical’s ultra-popular distribution, Deepin has been around since at least 2004. Originally, the distro was based on Debian, but it shifted over to the Ubuntu base in 2006, and through its time, 11 major versions have been released.

The reason most of us haven’t heard of Deepin until now is that it’s Chinese-based, although English versions have been offered since at least 2009. After hitting up the main website, you’ll want to click on the “English” link at the top to be able to navigate around (unless of course, you can read Mandarin). Once translated to English, we can see what Deepin is about: “Fast, Elegant and easy to use.“

It seems safe to say that Deepin is designed to give people a no-nonsense desktop that’s fast, looks good, and is intuitive. But as mentioned before, this isn’t just some Ubuntu derivative with custom packages pre-installed. Deepin 12.12 features an entirely unique desktop environment (simply dubbed Deepin DE), and it even includes a couple of custom applications, such as DMusic and DPlayer – both fairly self-explanatory. 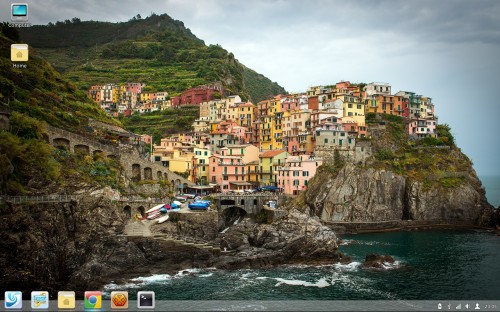 Attractive, isn’t it? Note that the wallpaper isn’t stock (I grabbed it from here), but all of the default wallpapers are quite nice (an example can be seen here). As you might be able to tell from those shots alone, Deepin is rather polished. The desktop environment is custom, as are the icons (I believe). Deepin even has its own software center, and it’s good: 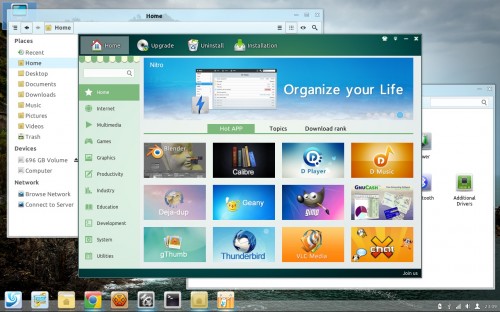 I’ve never liked the Software Center in Ubuntu, nor Linux Mint’s, but this is… just fantastic. It’s attractive and intuitive to use. Right after an install, I updated the OS with no issues, and I installed a couple of extra apps with ease. Unfortunately, it doesn’t seem like this software manager recognizes PPAs, but I could just be looking in the wrong place. Since this is based on Ubuntu, PPA management works via CLI as normal (I installed HexChat this way).

Based on the window design, you might say that Deepin is catering to the Windows crowd a little bit, but that’s really where the similarities end. Here’s what it looks like when you hit the main menu: 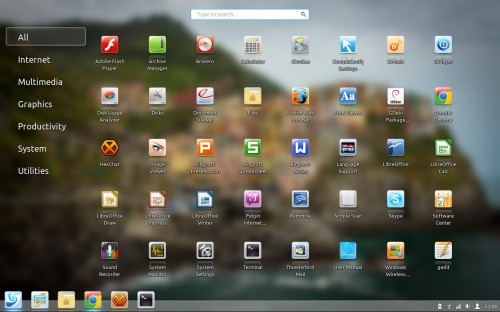 We’ve definitely seen this sort of app list before, but it works, and works well. I’m very pleased with how things are laid out and managed. Any app you want to be “docked”, you can simply right-click them to do that. There IS a bit of a lack of customization regarding the taskbar; you can’t remove the “Show Desktop” icon, and it doesn’t seem like you can adjust the behavior except to have it automatically hide. Hopefully in future versions customizations will be added; this is the first Deepin DE release, after all.

Overall, I’m extremely impressed with my first few hours with Deepin… so much so that I’m almost considering installing it to my primary PC and giving it a proper review.

Want to give it a shot yourself? Head here. Because the installer is based on Ubuntu’s, you can install alongside your Windows or other Linux distro quite easily. You’re also able to goof around in a live environment before committing to an install. But one warning: the image is over 1GB, so CDs are out. You can easily create a bootable thumb drive with UNetBootin, however (just choose the Diskimage option rather than Distribution).