Ubuntu may be the most popular desktop Linux choice, but it wouldn’t surprise me if the total install-base of its derivatives proved to be the more impressive of the two. Out of the box, Ubuntu does a lot right, but it does leave a lot up to the user in terms of installing codec support, tweaking tools that are actually worth using, common proprietary applications and of course, some eye candy. For that reason, distros like Linux Mint have deservedly earned a die-hard fanbase over the years, as it looks good, takes care of many basic post-install chores for you, and is enjoyable to use.

With that, take the idea behind Linux Mint and pile on extra applications, a completely re-configured GNOME 2.32 environment, Compiz support from the get-go, applications that have been tweaked according to popular likes and dislikes… and then call it Pinguy OS. What does the name mean, and how is it pronounced? I have no idea on either account, but I do know that this is one of the most hassle-free distros I’ve tested out in a long time.

While Pinguy OS’ core is based on Ubuntu, it wouldn’t be fair to call it an ‘Ubuntu Derivitive’ because that’s just the beginning. According to the installed repositories, it also grabs packages from Linux Mint and Elementary OS; perhaps others. A fairer but subjective term might be ‘best of all worlds’. 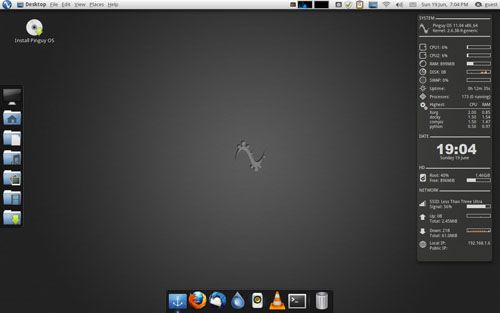 Like most popular distros out there, Pinguy OS features a live CD that allows you to experiment with the OS before committing to an install. This isn’t some lacking live environment, either. It’s replete with full Compiz support and seems to be void of nothing. As a result of it being so full-featured, though, the initial boot time was a bit lacking compared to a vanilla Ubuntu 11.04.

Below, you can see Compiz in action, thanks to the cube feature, and also a portion of the installer. To get that job done, Pinguy OS uses the same installer found in Ubuntu 11.04 ‘Natty’ (if nothing else, the installer icon gives that away). Since Natty’s installer has proven to be one of the best I’ve ever used, I’m glad to see it stuck with here. After all, “if it ain’t broke”… eh, nevermind (*mutters something about Unity and GNOME 3*). 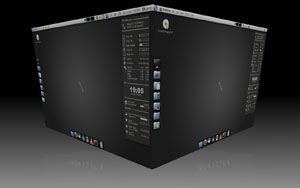 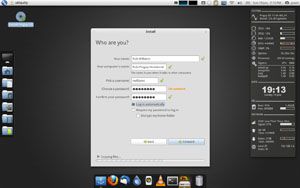 As you can see in the screenshots above, Pinguy OS modifies GNOME 2.32 to an extent most other distros do not. Docky, the popular Mac OS X dock clone, has been implemented, along with Conky, the system status applet found to the right of the screen. On top of that, other icons can be found in the system tray, including one for Webilder, a tool that automatically grabs popular wallpapers from Flickr and keeps your desktop looking fresh.

Not pictured, the main OS menu itself is, aside from the theme, pulled straight out of Linux Mint. It’s in all regards simple to navigate, and thanks to its built-in search, it’s even easier to search for an application that may not be immediately seen. In addition, if a package is not currently installed, but it’s typed into the search bar, an option will appear that will allow you to install it with ease.

As you can likely tell, while Linux Mint aims to give people a more robust Ubuntu offering, Pinguy OS takes things to the next level. Chances are you won’t be needing to add things after the install, but instead whittle things down. Even Mozilla’s Firefox is pre-quipped with 18 extensions. Considering I don’t use a single extension in my personal Firefox, this is a bit overkill for me, but you may feel different. 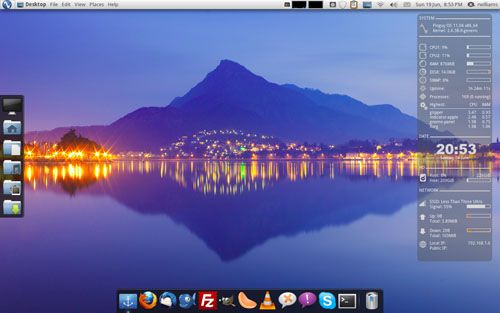 Configuring Pinguy OS couldn’t be easier, though there isn’t a one-stop-shop for getting the job done. One tweaking tool is Ubuntu Tweak, while another is the Compiz manager. And don’t forget that Conky and Docky and Pocky and Rocky (alright, I got carried away) also have their own respective configuration tools. For the average user who wants a robust OS out of the gate though, it’s going to be arguably easier to tweak these things to your liking after the fact than to start from scratch.

Overall, I’m liking what I’m seeing with Pinguy OS so far. While it’s a little ‘bloated’ for me, no one could argue that it’s not at least full-featured. This is the kind of distro that newer Linux users should love, because it looks good, and takes care of most of the post-install hassle that other distros might require of someone. For those who want to try out Linux but worry about the challenge, there are few distros as polished as this one.

If factors allow, I may continue to use Pinguy OS for the next week, and if that’s the case, I’ll write up a more thorough “in-depth” look in the near-future. In the meantime, I’ll be wrapping up our full look at Fedora 15, and if rumors prove true and Sabayon 6 launches soon, I’ll be giving that a thorough test as well. As usual, stay tuned!

June 22 Addendum: Something I failed to mention here is that for those who don’t like some of the features Pinguy OS ships with, such as Docky or Conky, they can be uninstalled in just a few steps. Like most things Linux, there is no such thing as being forced into what you’re given. Apologies for failing to acknowledge this!