Adobe Beginning To Roll Out Creative Cloud Overhaul To Users

Since its launch eight years ago, Adobe’s Creative Cloud application has changed seemingly little. It’s always acted as a hub for installing the software Adobe licenses, like Photoshop and Illustrator, but over the years, it’s been iterated upon to deliver additional useful features and resources. That includes a section to brush up on skills, and others to manage fonts and other libraries. 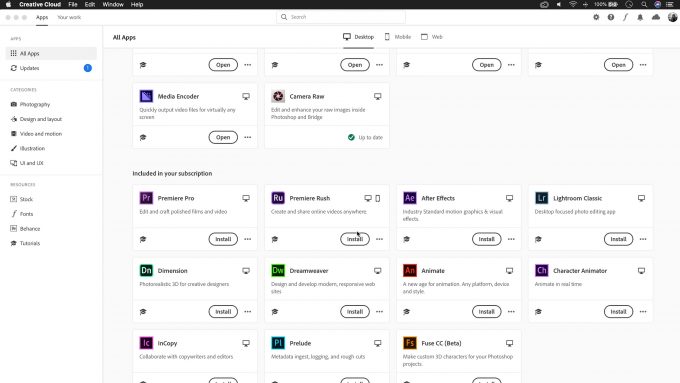 With a new update that’s rolling out to people worldwide, the Creative Cloud app transitions its modest IM-like form-factor into a full-blown window that appears to be meant to be used maximized. This isn’t a problem per se, but we really do hope the update is going to include a “compact” mode, because for many people, Adobe CC is an app that has no need to be full-screen.

As before, users will be able to manage the installation of the many different applications, which includes the continued ability to install previous versions. What’s new is that all of these applications will be sorted into different categories, so even if you haven’t discovered an application yet, you may find out that you need it this way. You can even sort by Desktop, Mobile, or Web, to fine tune things further. Yes, Adobe really does have that much software.

Adobe wants CC to be a true one-stop shop, so inside of this application, you can manage your various libraries and standalone assets (fonts, Behance, et cetera). Collaboration has been a huge focus of this update, allowing teams to share assets and work on projects together easier than before.

We’re not sure if it’s a complete coincidence or not, but in recent weeks, we haven’t had to deal with Adobe logins with our software as much as usual, which gives us hope that the company’s activation mechanism has had its aggressiveness throttled back a bit, but time will tell. Adobe has in the past year added the ability to deactivate devices from inside of its website, so we have at least that much to be thankful for.

We’re not exactly sure when you could expect to receive this update, but it seems likely that it will be very soon. Our own copies of Creative Cloud haven’t triggered an update yet, but once it happens, we’ll dig in and see if there are any extra useful features to discover.