Adobe Supercharges Premiere Pro And After Effects With Frame.io Collaboration

Adobe has today rolled out a number of big updates to its Premiere Pro and After Effects tools, with collaboration being one of the major focal points. With Frame.io, Adobe is allowing multiple users to effectively work on the same video project, with the ability to instantly share captured video, comment on segments that could be changed, adjust settings or add effects as normal, and ultimately, publish.

In a demo we were provided last week, a user captured a live video with their smartphone, and once finished, it automatically copied over to Frame.io, which made it available not just to this user, but another editor, as well. This design allows two people to edit the same video, while allowing clients and other reviewers to see the work as it gets put together. 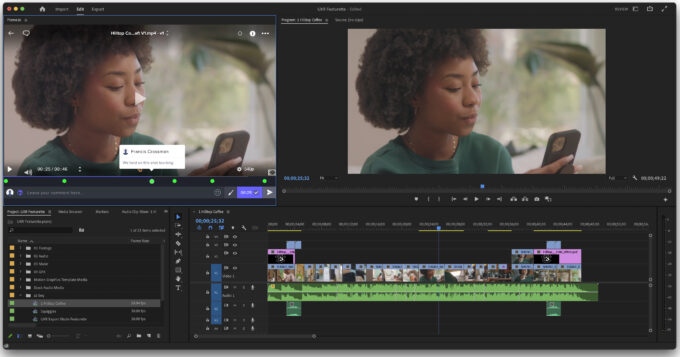 Naturally, for Frame.io to be truly useful, online storage needs to be involved, and so Adobe is providing 100GB to every Premiere Pro user. Because time is money, Adobe ensures that its Frame.io storage is super-fast, so if you have a drool-worthy upload speed, it should prove itself especially useful here.

For those with multiple projects on-the-go at any given time, you should dig the fact that this collaboration feature allows for up to five concurrent projects at once. Both the user concurrent count, as well as the storage, can be upgraded after-the-fact with an augmented Frame.io subscription. 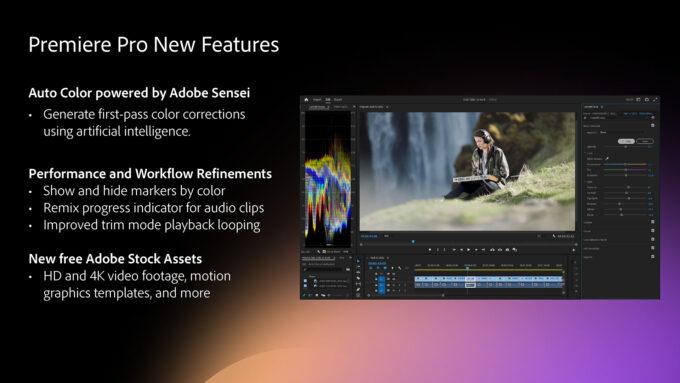 Even if you don’t care to take advantage of Frame.io collaboration, there are other Premiere Pro enhancements that make the latest version worth upgrading to. Stemming from beta versions released last year, Adobe has finally rolled out improvements to Premiere’s import, header bar, and export, all made better with the help of user input.

One small but useful detail: the export is now set to upload a video as unlisted rather than straight publish – likely a useful decision, since YouTube is notorious for taking longer than expected to encode the full detail in time for its publishing. Overall, Adobe is working to make the interface more intuitive and easier-to-use, but without holding back any of the options you may need.

Other improvements to Premiere Pro include an Auto Color feature powered by Adobe Sensei, the ability to show and hide markers by color, a remix progress indicator for audio clips, and many free 1080p and 4K clips added to Adobe’s Stock service. 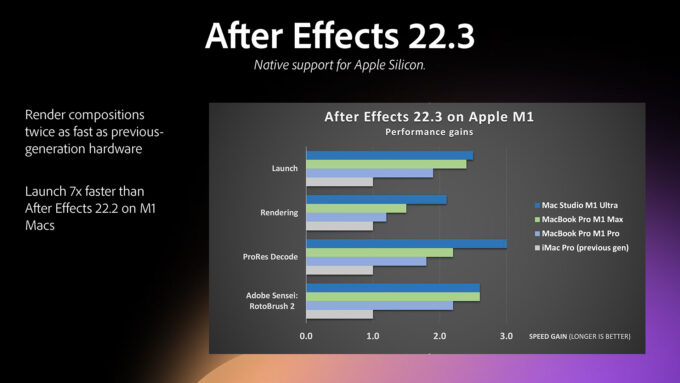 On the After Effects front, Apple users will be glad to know that M1 official support is now baked-in. The company notes that the software now launches upwards of seven times faster, and as you can see in the provided chart above, performance can surpass previous Intel-based Macs. Interestingly, the decode is particularly accelerated when moving from the M1 Max to M1 Ultra.

Other features added to After Effects include Scene Edit Detection, which can detect scene changes and automatically place them as layers or can create markers at edit points to help you get started quicker. The 2D and 3D viewer has also been improved, to allow you to see the scene outside of the viewport, making it easier to navigate and optimize camera placement.

Everything mentioned here is included in your preexisting Creative Cloud subscription, provided you have access these respective tools to begin with. While the updates are dropping today, there may be a bit of a delay before they will show up in your Creative Cloud Desktop app – at least, that’s the case with us. By end-of-day, you’ll likely be able to snag the latest version.