Since the launch of its first EPYC processors, it’s been clear that AMD had huge ambitions for the enterprise. Not only was the company offering CPUs with more cores than its competitors, the Zen architecture has continued to improve and make each of those cores more potent, and more effective in a large number of workloads. Today, the company talked at length about where it will be going from here.

At its Accelerated Data Center event, AMD announced not just new hardware, but even new partnerships. Meta, Facebook’s overlord, has officially adopted AMD’s EPYC CPUs to power its hyperscale business, with focus having largely revolved around single-socket servers – those that pack a serious performance punch, but don’t draw nearly as much power as two-socket solutions.

AMD also notes that its relationship with SAP is being expanded, with EPYC going to be used in SAP’s S/4HANA cloud infrastructure.

AMD couldn’t host an event talking about the future of its data center business without some hardware announcements, and fortunately, what was unveiled is pretty dang impressive. The company has already teased its 3D V-Cache feature in the past, but at today’s event, it was revealed that these new CPUs would triple the amount of cache available to each socket.

All of AMD’s Zen-based CPUs have impressed from the cache standpoint, with each model generally matching or beating out the amount of cache available from the competition. With the release of EPYC Milan earlier this year, 256MB of cache per 64-core CPU was great, but now we’re seeing Milan-X boast upwards of 804MB. That’s almost an entire gigabyte of super-fast cache – it’s kind of mind-boggling. 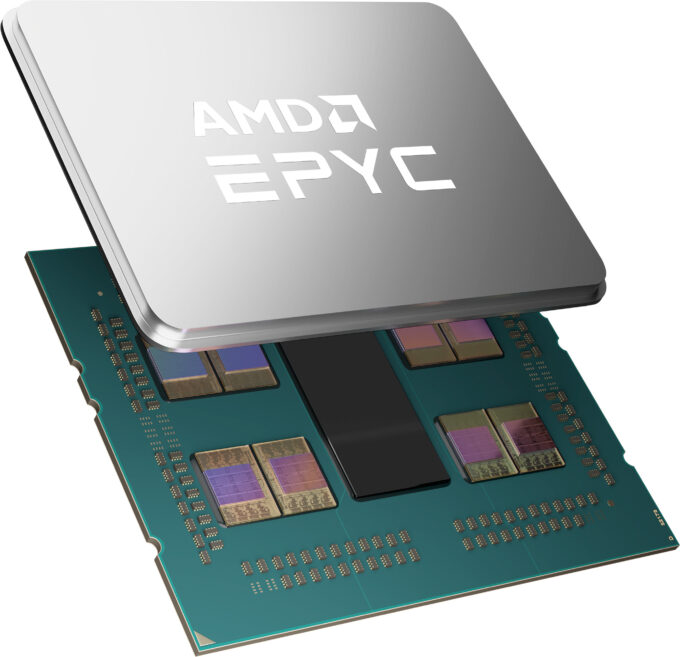 Perhaps the best thing about these new Milan-X chips is the fact that they can plop into preexisting SP3 sockets (after EFI upgrade). While not every workload is going to benefit from a massive amount of additional cache, those that can could see improvements of up to 50%. AMD in particular calls out finite element analysis, structural analysis, computational fluid dynamics, as well as electronic design automation as workloads that will benefit greatly from the added cache.

Where GPUs in the data center are concerned, it’s been challenging for any company to eat away at NVIDIA’s dominance, but AMD hopes to make huge moves with its Instinct MI200 GPU, which is the first to be built around the company’s CDNA2 architecture. 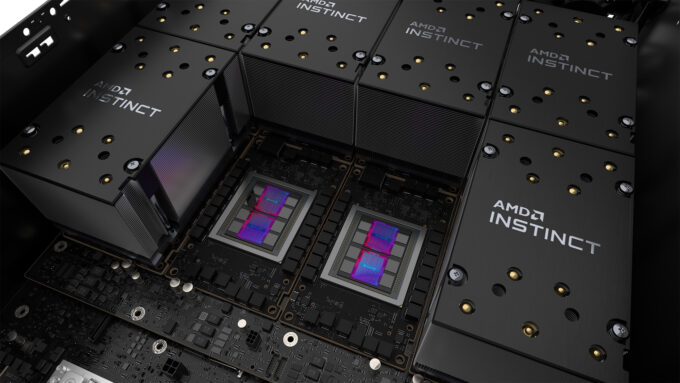 AMD is going straight after NVIDIA’s top-end enterprise parts with its MI200, and it brings with it some rather jaw-dropping specs. The original MI100 was equipped with 120 compute units, while MI200 bumps that to a staggering 220, delivering up to 14,080 cores. Its peak performance hits 47.9 TFLOPS for both FP32 and FP64, while it sees 383 TFLOPS for FP16.

While NVIDIA offers up to 80GB of VRAM on its A100, AMD made sure to beat that by offering 128GB as standard for both its MI250X and MI250. If the density doesn’t seem impressive enough, know that it’s ECC-capable, and can push up to 3.2 TB/s bandwidth. It seems safe to say that AMD really wants to claim a good chunk of the HPC market. This hardware is downright impressive.

It’s worth noting that both Milan-X and MI200 will be powering the Frontier supercomputer at Oak Ridge National Laboratory, due to go online in 2022.

Speaking of 2022, AMD also talked a bit about its Zen 4 architecture, which will hit EPYC as “Genoa”. Genoa will be built on 5nm, and AMD claims that its production is going smooth so far. It will offer 2x the density and power efficiency, and up to 1.25x the performance, all compared to 7nm. The upcoming top-end Genoa chip will again increase core counts, to 96 (and 192 threads). 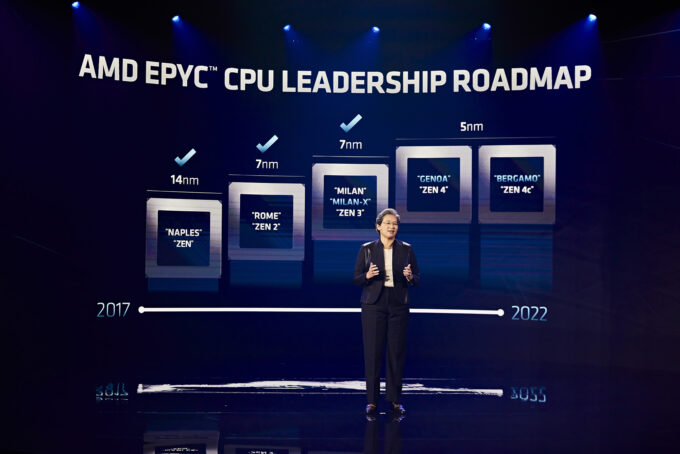 Surprisingly, Zen 4 wasn’t the only thing unveiled; so too was “Zen 4c”, a cloud-focused take on the architecture. It will feature a tuned cache hierarchy that can allow even higher core counts. Codenamed Bergamo, these Zen 4c chips will include up to 128 cores, will be feature comparable to Zen 4, and be usable in the same platform.

Overall, AMD’s announcements today are all pretty compelling in their own right, and it’s really hard to pluck one from the group that’s more impressive than the other. We’re seeing GPUs with incredible specs, and CPUs with even more cores than before. There’s a lot to look forward to from AMD, to say the least.