Right on schedule, AMD announced its Zen 3 processor series today, and did so with one of the quickest presentations we’ve ever seen (a good thing, really). AMD’s Lisa Su, Mark Papermaster, and Robert Hallock all drilled it into our heads with great efficiency that Zen 3 is something special, and everyone aside from the competition has reason to look forward to it.

A promise out-of-the-gate is that Zen 3 will offer an instructions-per-clock performance boost of up to 19%, which is a geomean of 25 different workloads with the CPU locked to 4GHz. According to AMD, major reasons for this boost are tied to the load/store and front-end, while the execution engine, cache prefetch, micro-op cache, and branch predictor all contribute their own percentage points.

The reason this increased IPC matters is because it can directly improve scenarios that are hinged on it. That can include gaming, so with these IPC improvements, we’re likely to see the argument of Intel’s chips being better for high-FPS 1080p gaming soften a bit. 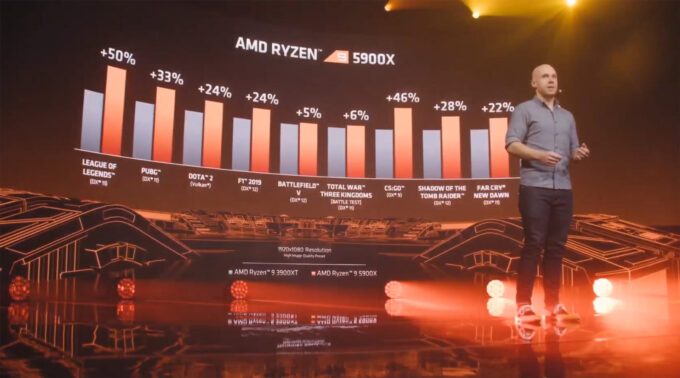 As the slide behind Mr. Hallock above can attest, there are some rather major improvements to be seen here, and the fact that all of these results are at 1080p is important. Intel has used 1080p gaming as a highlight of its products ever since Zen hit the scene, so AMD is really sticking the knife in here. The performance improvement to CS: GO in particular is one we really want to witness ourselves, as +46% is extreme, any way you look at it. We’re talking CPUs here, after all, not GPUs.

While gaming is a huge focus here, AMD also mentions improvements to other workloads that can benefit from a faster CPU, like CAD. Rendering was also mentioned, but with an IPC boost as we’re seeing it, it seems likely that viewport interactions might get a more noticeable improvement.

AMD says that its Ryzen 5000 series chips are going to hit the market on November 5, while October 28 is still being pegged as the announcement date of the company’s next Radeon graphics cards. To tie in with these launches, AMD is giving those who purchase a Ryzen 3000 series or Ryzen 5000 series processor a free copy of Far Cry 6, a deal that lasts straight through to the end of the year.

With a November 5 launch date, reviews of these Zen 3 chips will likely be a few weeks off. We’re definitely eager to see how AMD’s claims hold up.