In our post about NVIDIA’s GeForce SUPER cards earlier today, we mentioned that the GPU release season is starting to heat-up. We didn’t expect anything ProViz-wise to come out ahead of SIGGRAPH, but since NVIDIA decided to rain on Radeon’s parade today, it seems like AMD wanted to have the last word, and release a new Radeon Pro – or rather, announce one. 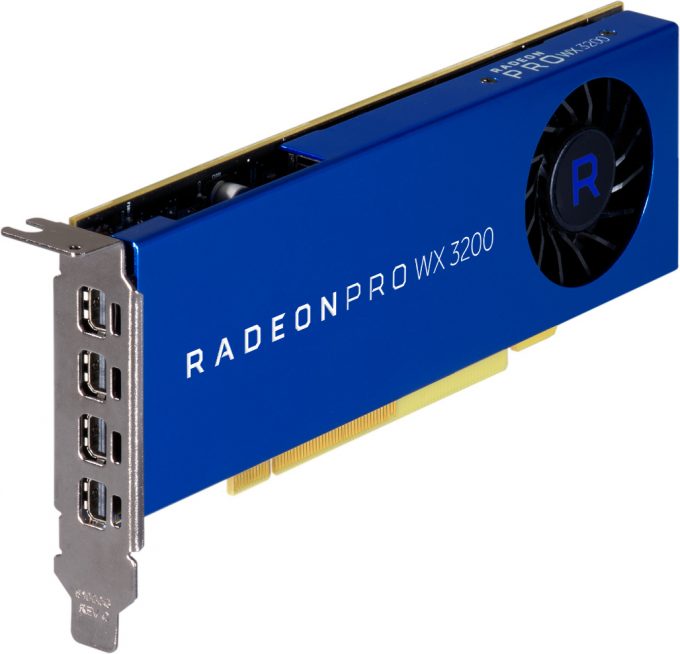 AMD says its new Radeon Pro WX 3200 will come out at some point during Q3, which could mean anytime between now and the next three months, since this current quarter only began yesterday. Like the WX 3100, the 3200 is based around AMD’s Polaris architecture, which means Navi isn’t going to come in and replace everything in one fell swoop.

The WX 3200 isn’t a replacement for the WX 3100, since it’s priced about $30 higher. For that extra cash, the card gets a ~30% performance boost. The VRAM stays the same, at 4GB, as does the form-factor and four available mini-DisplayPort connectors.

The WX 8200, released last summer, was a bit of an oddball in that there wasn’t any WX 8100 to come before it. All these months later, AMD is finally adding another “2” to the lineup, which means it’s now taking care of the $200 and $900 price-points for the current generation, which itself means that there are a lot of gaps to be filled in the future. With that being the case, and SIGGRAPH happening at the end of the month, we could be in for more launches soon.

The WX 3100 and 4100 didn’t launch together, but the 3100 and 2100 did, so it’s surprising to see only a single GPU launch today. Again though, more launches could be coming, and AMD could have really just wanted to inject some of its own GPU news into the cycle during a SUPER-filled day. The company will have its real fun next week, though, as both Radeon Navi and Zen 2 are going to be launched.

It’s beginning to feel like this summer is not going to have many dull moments.