AMD announced today its latest generation of GPUs, the Radeon RX 7000 series, sporting some impressive generational leaps. There were two cards announced, the RX 7900 XTX and the RX 7900 XT, to be released December 13th 2022, at $999 and $899 respectively through AMD directly. Third-party AIBs will be making announcements in the coming weeks.

There are a number of key advancements made with this latest generation, some more complex than others. One of the big architectural changes is the the introduction of a chiplet design, a first for any GPU design. AMD introduced chiplets with its CPU designs back with the Zen 2 processors, where multiple CCX modules surrounded a dedicated I/O chip, each being made on a different manufacture process. 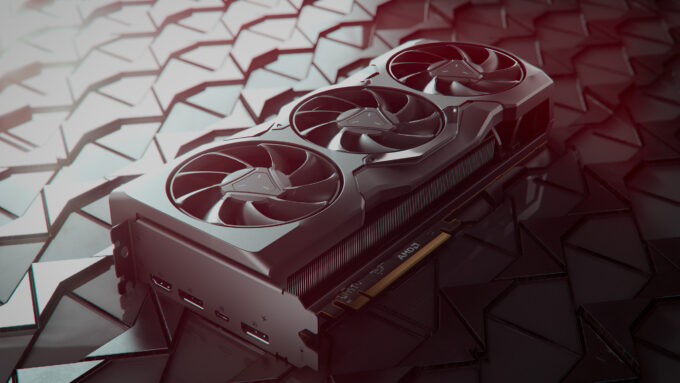 While AMD has made a Multi-Chip Module (MCM) before with a single GPU surrounded by HBM chips on an interposer, chiplet designs make use of distinct logic spread over different chips on an MCM, in this case, separate graphics compute and memory logic, connected by Infinity Fabric. The RX 7900 XTX consists of 7 chiplets, a single central Graphics Compute Die (GCD) made on a 5nm process, surrounded by 6 Memory Cache Dies (MCD) made on a 6nm process by TSMC.

On the 7900 XT, two of those MCDs are dummy chips. Partial specs of the announced GPUs can be found below, we’re still waiting on a few details. By decoupling the memory controllers from the compute unit, and using a larger manufacture process, AMD can increase the yeilds on the somewhat temperamental EUV 5nm process, reducing waste, and cost.

Another of the big changes is the introduction of Dual-SIMD instructions, effectively doubling the performance of each compute unit, increasing the total performance from 23 TFLOPS on the 6900 XT, to 61.6 TFLOPS, or 2.7x the improvement. This should be taken with a pinch of salt, since while this is the theoretical performance increase, in practice, that may be a lofty number to achieve except under very specific circumstances, notably with AI. That 2.7x performance increase is the same improvement seen with the AI modules implemented, with Bfloat16 performance being the used metric. 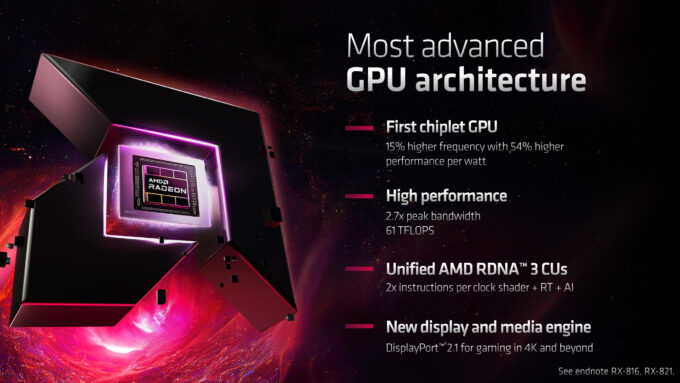 Ray tracing got a 50% improvement, in part because of more dedicated hardware, but also more instructions. While this may help close the RT gap on NVIDIA in games, it’s the creator side of things we’re more interested in. We’re not sure if AMD will catch up to NVIDIA’s OptiX, but it’ll be fun to find out.

One of the other big changes was a decoupling of clocks on the GCD, allowing independent clock control of the shaders from the front-end clock. This allows for a wider frequency range, and, more importantly, greater power savings as well. AMD touted its overall power efficiency gains to be around 54% over the previous generation, 25% of which was attributed to this clock decoupling. If you look at the TFLOPS count and the TDP of 355 Watts, it’s certainly impressive. During the presentation, AMD was also rather pleased to announce the lack of a new power connector, too, keeping the dual 8-pin ATX connectors instead of the new 16-pin 12VHPWR gracing NVIDIA GPUs. 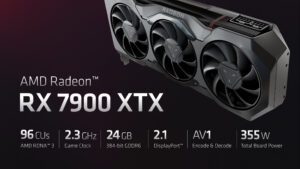 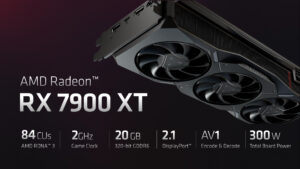 Video de/encoding was also a rather important talking point, not simply because of the introduction of the impressive AV1 codec that’s been making the rounds, but also multi-stream decoding and encoding with AMD SmartAccess Video. This can be used to double up the performance of one of the encoders, but can help massively in video editing. There is also a tie-in with Ryzen 7000-series CPU owners out there too, where encode and decode workloads and be distributed across both the CPU and GPU simultaneously.

The last major announcement to come with the Radeon 7000-series was the introduction of DisplayPort 2.1. The main advantage of this is the huge increase in the total available bandwidth of the connector, allowing for some rather extreme display scenarios, such as 4K resolution at 480 Hz. If that isn’t ridiculous enough, how about 1440p at 900 Hz. DP2.1 also brings with it 12-bit color support, too. AMD also decided to bring back the USB-C port as well, perhaps with future VR/AR technologies to come? There was also a sneak peak at a Samsung Odyssey Neo G9 display, the first 8K Ultrawide monitor – although we’ll have to wait until CES 2023 to get more details. 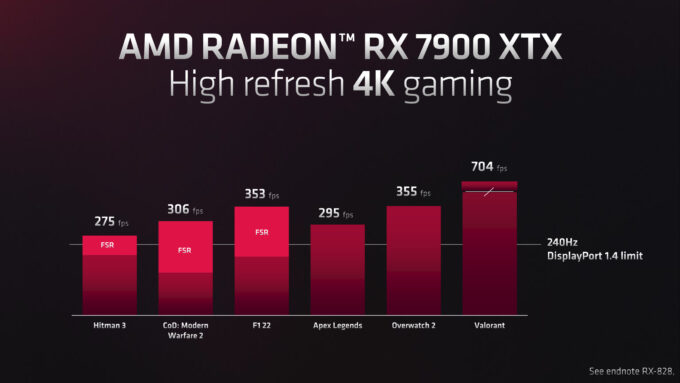 With all this talk about features and advancements, what are the actual performance metrics we can expect to see? For the most part, depending on the game and the settings, and whether or not AMD is including different FSR versions and ray tracing performance, we see between 50-70% uplift in overall performance from the RX 7900 XTX over the RX 6950 XT. There is a lot less emphasis from AMD on ray tracing, despite the improvements, and more on total raster performance and upscaling features from FSR. Speaking of FSR, AMD announced FSR3, and will have its official launch some time next year. There were some initial presentations on it running 8K games at 90+FPS, using new Fluid Motion tech, capabilities similar to DLSS 3.0, just open source.

Overall it’s an impressive launch from AMD, and a rather unexpected price-point too. The jump to 5nm is not cheap, but the new chiplet design will help improve yields and keep the price down. How the card will hold up to the competition is something we’ll have to wait and see in December.