AMD already hit us at the beginning of the week with some rather encouraging news, it’s new Polaris architecture and the jump to FinFET manufacturing techniques. While less dramatic, AMD has few more surprises in store with its current line of APUs, and some changes to come with the next generation.

Meeting up with AMD at CES 2016, there were a couple surprises in store for us. While hardly a bombshell, AMD admitted that its current CPU and APU socket lines are… confusing. Currently, there are three different sockets required for its different product ranges; including the AM3+ for its CPUs, FM2+ for its APUs, and the rather old AM1 for its Athlon and Sempron ranges. With the next generation coming out, both Summit Ridge CPUs and Bristol Ridge APUs will use the same socket – which just so happens to be a new socket, AM4.

Beyond a simple name and the fact of consolidation, there is little more we know at this time. However, just a simple mention is enough to ease the back of the mind somewhat. It’s a long overdue change, but at least its finally happening.

AMD was also quick to point out an upcoming change to its current range of stock coolers – they’re not terrible anymore. The new Wraith cooler has more surface area, a more powerful fan pushing more air, and to top it all off, significantly quieter too. It even comes with some backlighting too. The fan runs at a fixed speed and generates just 39dB of noise – not the quietest fan out there, but when placed in most systems, it’ll be pretty much inaudible. For a point of reference, the old FX CPU coolers could hit as much as 53dB under stress. If you plan to build a new AMD system when the next gen APUs come out, give the stock cooler a try, you might just keep it… unless you plan to overclock. The latest CPU to get the new cooler is the FX 8370. 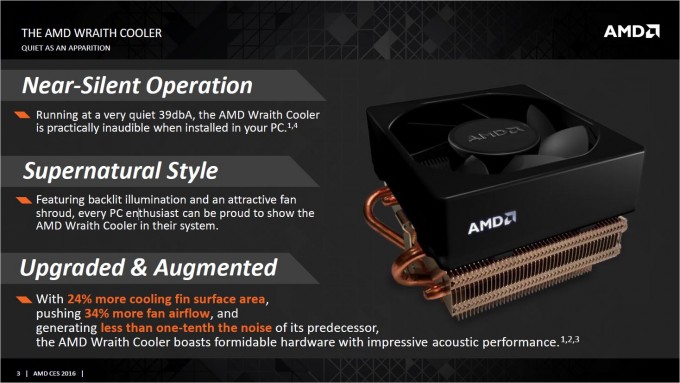 On the processor side of things, The new APU refresh is coming, the A10-7890K. With a max turbo of 4.3GHz, AMD claims it as the fastest desktop APU its created. It still uses DDR3, so any old bit of RAM lying around is likely to work. The chip is fully overclockable, including CPU and GPU multipliers. While its release was leaked a while ago, it’s finally hitting store shelves.

The last in the line of current generation motherboards using AM3+ and FM2+ will see better support for USB 3.1 gen 2 (that’s the 10Gbps USB 3) with inclusion of USB Type-C connectors beginning to show up. There is also going to be support for M.2 connectors – at least, the SATA variants.

AMD has been trying to muscle in on system builders too, and it has quite the variety of components now (remember, they make SSDs and RAM too now – kind of). So it’s not too surprising that it’s putting together complete systems now. Aiming for a mix of budgets, AMD wants to show that you can put together a reasonably powerful gaming PC, while still on a tight budget.

While none of this is too surprising, there is a sense of change at AMD – not just the products, but the way it handles the little things. The next few months are going to be well worth the wait.