Aloha, AMD Hawaii! Yes – the much-anticipated Radeon R9 290X has arrived. Our look will come later, but we can still take a look at what it is that makes this thing tick. What it brings to the table: 2,816 cores, a 1GHz clock speed, 4GB of GDDR5, and perhaps most interesting, a 512-bit memory bus.

Our friends over at HotHardware were pleased enough with the R9 290X to slap a “Recommended” award on it. As the title of this post suggests, AMD’s latest high-end costs less than NVIDIA’s GeForce GTX 780 (-$100), but performs just a little bit better. Past that, the feature-set is rich as well, with an onboard toggle to enable “Uber” mode, and other niceties that we talked about in our R9 280X review. 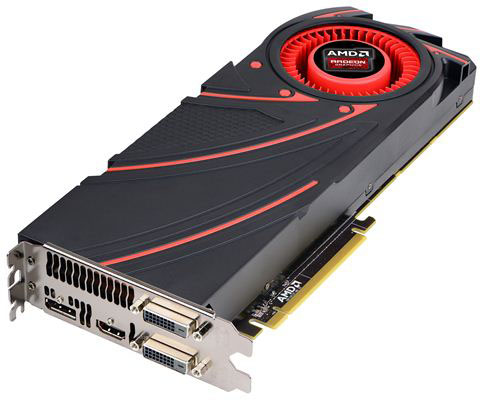 The main downsides of AMD’s 290X is that it’s louder than competitive GeForces, according to HotHardware, while it also “pumps out a lot of heat“. The card’s power consumption is also rather high, but that’s nothing to be surprised about – and really, given its faster performance, an extra 14W at load over the GTX 780 isn’t too bad.

With the R9 290X having been released, AMD’s current-gen lineup is:

AMD is holding-off on revealing the R9 290 at this time, but given the lineup at the top-end here, it’s not too hard to figure out how it will fit in.

What will make this release even more interesting is NVIDIA’s upcoming launch of the GeForce GTX 780 Ti, announced just last week. Given the fact that the R9 290X is faster than the 780, chances are that NVIDIA will drop the price of that card to align better with AMD’s latest, while launching the 780 Ti at the same price that the 780 sits now. With all of this coming to fruition, I think it’s safe to bid farewell to TITAN, because especially with the 780 Ti on the horizon, it doesn’t quite fit in anymore.