After NVIDIA announced its DLSS (deep-learning super-sampling) upscaling technology along with its Turing generation of GeForce GPUs in 2018, the premise seemed cool, but the masses didn’t really take much notice. In fact, we remember seeing many bag on DLSS because of its fairly limited use. Once DLSS 2.X launched, opinions immediately swayed: even AMD fans started clamoring for #TeamRed to cough up its own competitor.

The truth is, most graphics technologies are not able to be spun up overnight, so if AMD didn’t already have a similar technology to DLSS in the pipeline, then it’d take quite a bit of time and effort to conjure something up that fans will get excited over. At Computex 2021, the company formally announced its FidelityFX Super Resolution technology, and by all appearances, there are reasons to be excited.

The video above shows a clip from AMD’s Computex keynote, where FSR is explained as a “super-optimized spatial upscaling” technology, that’s developed for “broad adoption”. That latter part is proven with the fact that FSR is going to be open source, and it will work on NVIDIA GPUs – including the aging GTX 1000 series (eg: 1080 Ti). 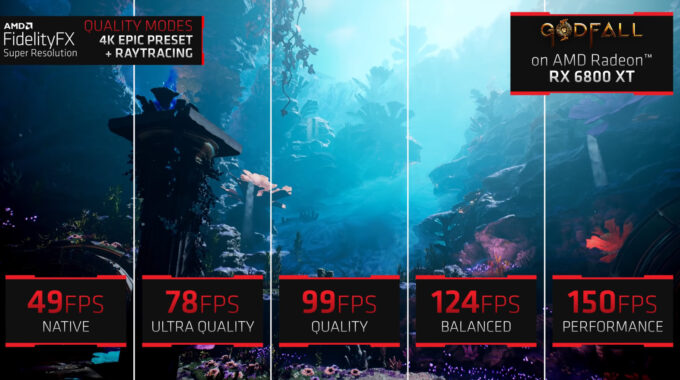 As with DLSS, FSR is going to offer multiple quality settings; maybe you’re keen for a higher frame rate, or craving higher image quality. With Godfall, and a Radeon RX 6800 XT, AMD says that 49 FPS could be expected at 4K natively. Enable FSR Quality, however, and the frame rate literally doubles. Sacrificing additional image quality will naturally increase the frame rate even further.

Technologies like this can give new life to any GPU, new or old, and it will make justifying 144Hz monitors even easier. Note that the performance metrics we were given revolve around a high-end GPU at a high-end resolution, but also like DLSS, lower resolutions are of course supported.

Further in the video above, an example of FSR running on an NVIDIA GeForce GTX 1060 is given, which hoists the frame rate at 1440p from 27 to 38 FPS. We’re not sure we’d call 38 FPS “playable”, per se, but no one will realistically turn down a free performance boost, as long as the image quality remains largely in tact. 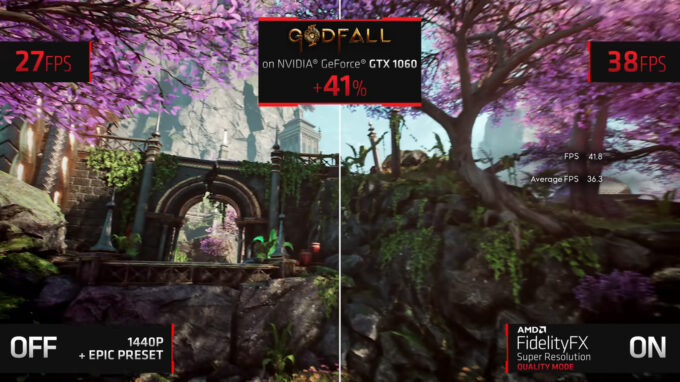 As with DLSS, it’s going to take some time to see the rollout of FSR, but AMD says that “over 10” game studios and engines will be supporting FSR in 2021. The official release of FSR will come on June 22, and AMD wants to hear your opinions on which games it should target to make sure it gets implemented as soon as possible. We’d imagine AMD-sponsored titles like Godfall will be the first to be blessed with the new technology, but hopefully we’ll end up seeing some NVIDIA-sponsored titles jump on board, as well.

At this point, we’re cautiously optimistic about all of these promises, and hope what’s delivered lives up to the hype. This is going to be a battle of NVIDIA with its dedicated AI cores vs. AMD with its use of preexisting GPU hardware. One thing’s for sure, though: this is very much welcomed, especially since FSR is not AMD-specific. If games offer both DLSS and FSR, that’d be ideal (especially from the perspective of comparing each side-by-side).

And now we wait…