The very second the embargo lifted on AMD’s Radeon RX Vega series, people stormed etailers like Newegg and Amazon to snatch one up as quickly as possible. Some got lucky, but many didn’t. In a matter of minutes, many who were craving to own an RX Vega were left empty-handed. Of course, products selling out fast is nothing new, but it seems clear to the world at large that the initial shipments here were paltry. This is despite the fact that AMD said that Vega was delayed in order to increase stock. In reality, it seems like the stock fell well below anyone’s worst guess, with some etailers or retailers supposedly receiving between just 0 and 100 cards.

If only supply were the only issue. Not long after cards hit retail, prices jumped a cool $100 USD. In the UK, an even bigger punch to the stomach was delivered through a £100 increase. Our friends at Gamers Nexus reached out to a couple of AIB partners and were able to confirm that launch pricing for the Vega 64 was $499 USD for only a limited time, which was thanks to vouchers provided to etailers. Once those vouchers ran out, Vega 64 jumped $100 in price. 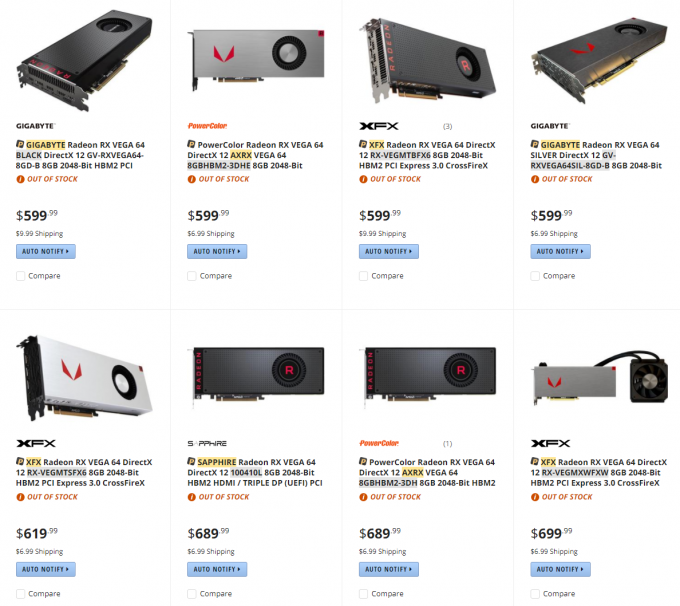 If things were left here, it’d be annoying enough, but there are a huge number of reasons why the entire RX Vega launch has been downright infuriating. Imagine as a reviewer working all weekend on benchmarking, and writing until 5AM in the morning in order to hit embargo, all for a product that no one can buy. It’s one thing to be a “paper launch”; it’s another to launch immediately and have no stock.

I don’t think enough stink is being raised about these shenanigans. AMD told a ballroom full of press and analysts that Vega 64 carried an SEP of $499. As we understand it today, this price was never meant to be permanent. Launch reviews were based on that $499 pricing. AMD had to have known that within 15 minutes of the card going on sale, that price would no longer be relevant. Fortunately for us, we took a compute look at the card first, where its hiked price could still be justified (it still beats out more expensive competition in some cases), but even so, there is some serious sketchiness going on. Per VideoCardz, AMD says:

This doesn’t answer much at all, which is a disappointing considering the fact that it took a couple of days to get published. AMD is in effect bragging about how quickly it’s seriously hard-to-acquire card sold. It’s not like a million of these cards hit the store shelves.

You can expect much the same for Vega 56, too, because otherwise, AMD is surely going to have super-thin margins (if it can make any money off of them at all). Both the Vega 56 and 64 are built like the $1,000 Vega Frontier Edition, with high-quality components, one of the best VRMs out there, and what I’ve been told (but haven’t been able to confirm yet), somewhere around ~$150 USD for the 8GB of HBM2. How can AMD make money on this card?

Ultimately, AMD is in a rough spot here, because even if Vega cards are flying off of the shelves as soon as they land, there’s clearly not enough stock. If you check out AMD’s fan haven over at reddit, many #BetterRed fans are either not in the market to purchase, want to go NVIDIA since those cards are actually available, or are forced to wait even longer if they truly want to get their hands on one of the most hyped GPUs in recent years. 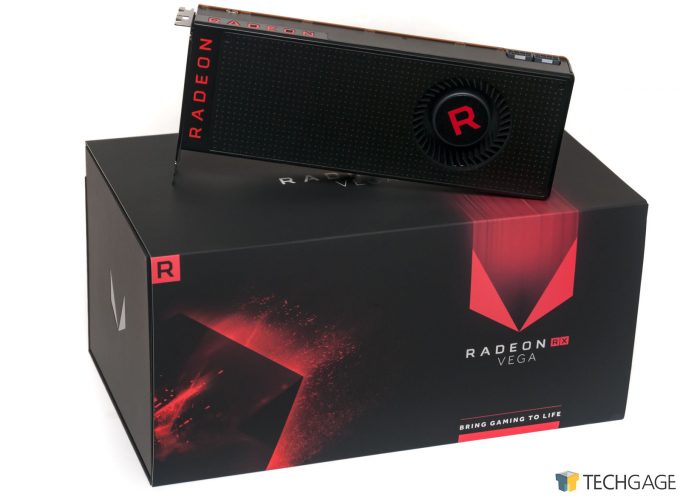 If only I could stop here (Rob, are you serious, there’s more?) Yup, there’s more. Radeon Packs are one of the worst sale mechanics I’ve ever seen in my life, and the fact that they were described entirely differently to press and analysts than how they are actually implemented makes matters worse.

At an RX Vega and Ryzen Threadripper event a couple of weeks ago, every single person I talked to (not an exaggeration) had no idea how the packs actually worked. After talking to AMD PR along with a group of press friends, we still were left clueless. Ultimately, we decided to just wait and see exactly how things worked when the card finally hit retail.

During a more private Q&A, someone asked AMD if these packs were designed to thwart miners, and essentially, it seemed like that was the case, even though the company didn’t want to be explicit about it. AMD also made sure to add that it would rather gamers buy its graphics cards over miners, but I have a hard time believing that when at launch, a specific driver was released to increase mining performance. That’s a good thing, but it’d be nice to not be lied to.

As it was described to us: people purchase a “pack”, get the (actually not) free games, and have the chance to purchase some great hardware for cheap. We were outright told that even if people didn’t opt for additional hardware, that extra $100 would still include the two “free” games. This is not at all the implementation as we’re seeing it today.

During the same Q&A, someone else asked about card allocation; how much would be standalone, and how much would be in these packs. Well, Vega 64 came out Monday, and as it stands today on Friday, Newegg has lots of Vega 64 available – if you want to buy one of these bundles. It’s worth noting that the monitor included with some bundles, Samsung’s C34F791, cost $950 USD at Newegg the same day we were briefed, whereas Walmart and Amazon had it available for $750 USD. Today, Walmart is selling it for $950 USD, while Amazon sells it for $850. In the shot below, a bundle gives you this monitor and Vega 64 for $1,335.86. Minus the $500 for the GPU, that’d make this monitor $835. Not exactly a deal when the same monitor was $750 USD in advance of this launch.

Based on what I’m seeing at certain etailers, I am willing to bet that even AMD’s own Radeon team didn’t know how these pack mechanics were going to work. As said above, it was made very clear to me that if someone bought one of these packs but didn’t actually want the other gear, they’d at least get the two “free” games. In reality, the only way to guarantee yourself a Vega 64 right now is to buy hardware you may not even need along with it.

Seriously, is this how a GPU launch should go down? At $499, Vega 64 is already rubbing against the threshold of gaming value for the buck, performing like the GTX 1080, but drawing a lot more power and generating more heat at the same time (I cannot wait to test with a cooler better than reference). $599 is downright foolish, unless of course you’re a compute nut and my workstation results make it still seem like a good deal. And really, that could be the case. For workstation purposes, the Vega 64 can actually beat out NVIDIA’s top-end GPUs in select cases.

That’s impressive, and more reason why I think Vega should have been left exclusive for the WX and Instinct markets. The RX Vega launch was surrounded with doubt for months leading up to the launch, and while it is a solid product overall, the amount of sketchiness surrounding the launch mechanics and availability puts a seriously sour taste in my mouth.