Right on schedule, AMD has today unveiled its next-gen Radeon graphics cards, built around the RDNA2 architecture. This of course comes one day after NVIDIA’s release of the GeForce RTX 3070, and based on what’s promised, we’re sure NVIDIA is already planning to plug more gaps in the months ahead.

When NVIDIA released its first Ampere cards, we were simply blown away by the performance offered, especially on the RTX 3080. We wondered if AMD would actually be able to strike back in an appropriate manner, because it’s no secret that the company hasn’t had many top-end graphics options lately. That does in fact look like it’s going to be changing. 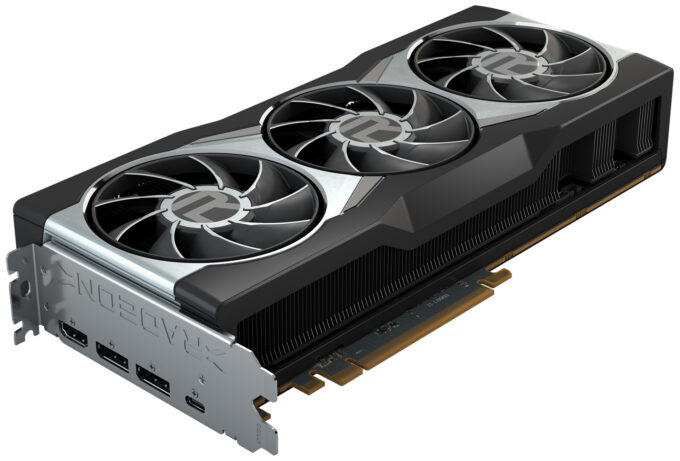 AMD took the veil off of the RX 6800, a $579 offering with 16GB of memory; the RX 6800 XT, a $649 offering with the same 16GB of memory; and the RX 6900 XT, a $999 option that ones again includes 16GB of GDDR6 memory. After peering at the specs on paper, it seems that the 6900 XT isn’t going to offer as much performance as its price premium suggests, so it’s truly geared for those who want the best Radeon possible, and don’t mind splurging for it.

Here’s a breakdown of the current lineup:

With this latest RDNA generation, AMD has bulked up the core counts and also the core clocks. The base clock referred to here is actually what AMD calls the “Game Clock”, but in real gaming, you should see it occasionally boost much higher. If we’re to take a simple look at the TFLOPS comparisons, the 6900 XT should be about 11% faster than the 6800 XT, while the XT looks to be up to 28% more powerful than the 6800 non-XT.

During today’s presentation, we were told much about some of the features that are coming, including “Rage Mode”. This is a preset found in the Radeon Settings application that will uncap certain settings to let the card breathe more, and improve overclocking. 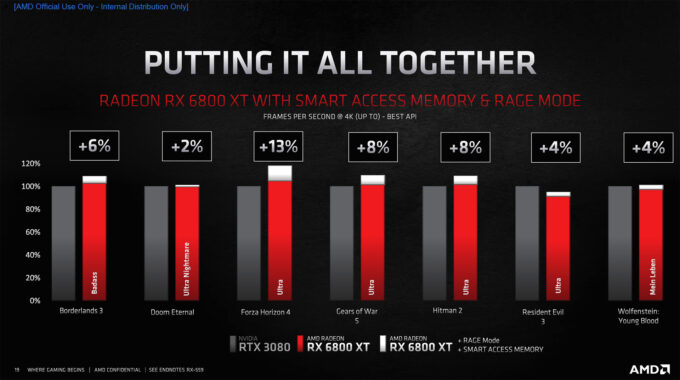 Another even more notable feature is Smart Access Memory, which seems to let the CPU gain access to the GPU’s memory to help speed up access and improve frame rates. The most interesting thing about this feature is that it’s not explicitly a GPU one; it requires a Zen 3 BIOS capable of toggling it to enable it. Once enabled, you won’t have to fiddle with it further in the driver – it will just improve performance (or at least not degrade it.)

What’s really interesting is that the performance match-ups show that NVIDIA’s Ampere isn’t the definitive winner in performance this generation. When comparing the 6800 XT to the RTX 3080, AMD shows that it effectively trades punches. In Forza Horizon 4, in particular, a huge 13% performance boost was seen (although that was with both Rage mode and Smart Access Memory enabled). 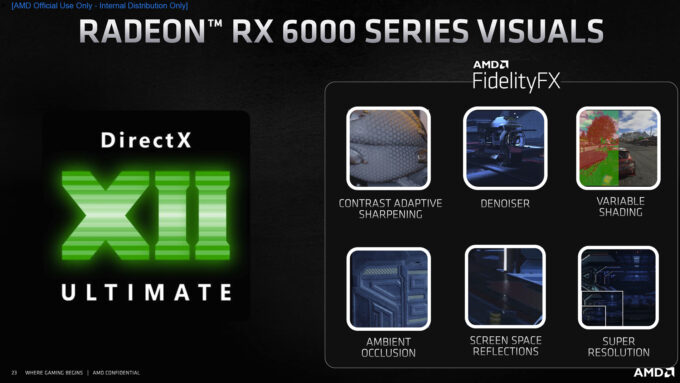 While AMD said that its next Radeon cards will support ray tracing, that is one aspect of performance that the company failed to address during its unveil. So, the verdict is still out on how “Big Navi” will handle the current crop of games, even in terms of support, not just performance. Aside from that, we have been teased with support for variable rate shading, denoise, and super resolution capabilities.

AMD says that its Radeon RX 6800 and RX 6800 XT will become available on November 18, while its top-end RX 6900 XT will land on December 8. It likely goes without saying that it’d be nice if AMD’s supply proved to be healthier than NVIDIA’s has been. We’ll find out soon enough!