AMD has just announced that it’s relaunched its “Raise the Game” bundle, and if you’ve been in the market for a new prebuilt system, you may find yourself lured in. With the purchase of any system – desktop or notebook – that features both a qualifying Ryzen CPU and Radeon GPU, gamers will be gifted both Resident Evil Village and Far Cry 6 – the latter of which would be delivered once the game launches on October 7. 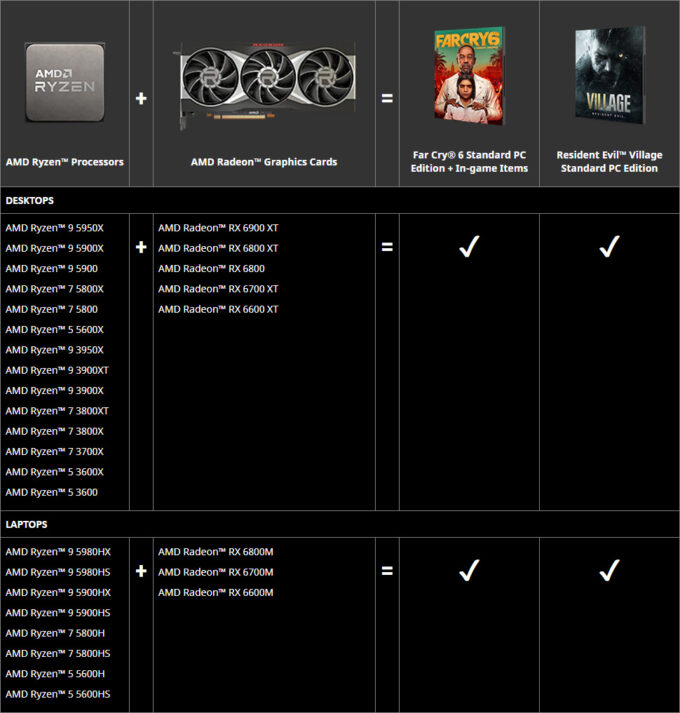 The full list of qualifying products for both desktop and notebook can be seen above. You don’t actually need to go very high-end in order to score these games; even a rig equipped with the six-core Ryzen 5 3600X and Radeon RX 6600 XT would qualify. For notebooks, as long as you have a configuration with at least a Ryzen 5 5600HS and Radeon RX 6600M, you will also qualify for the free games. As an added bonus, the promotion will also net you an AMD hat and t-shirt in Far Cry 6 – just in case you want to roam the island and let everyone know what you’re into.

AMD has a full list of supporting system builders on its website. For North America, AVA Direct, Cybertron PC, Maingear, Velocity Micro, and Xotic PC all currently have the promotion active.

While it would have been great to see this promotion passed down to DIYers, or those who only need a CPU or GPU for their new build, it’s not entirely a surprise that AMD would go this route considering standalone parts are still suffering price gouging most places. Every time a promotion like this comes along, we’re reminded what the good ol’ days were like, when you could actually get the GPU or CPU you wanted without much fuss. Memories!