AMD has just posted the latest quarterly Radeon Pro Enterprise driver, aptly named 19.Q3. This is the third Enterprise release of the year, encapsulating all of the bug fixes since the previous version, ISV certification updates, and new features and functionality. AMD regularly fixes bugs with iterative releases, so it’s important to note that you shouldn’t really go three full months without updating if a newer point release is available.

Nonetheless, 19.Q3 has a couple of milestones. At the forefront, AMD is touting that its “Day Zero” support of the latest industry applications has reached over 1,000 entries. It’s important to note that one version of an application can count as more than one entry here, and you’re bound to find many copies of 3ds Max (as an example) listed. But the number is a testament to how aggressively AMD is keeping on top of updates.

Of course, with every new driver release comes some mud-slinging, and in this case, AMD says that its WX 7100 will outperform NVIDIA’s Quadro RTX 4000 in Siemens NX 10. With promises of “up to 51 percent” faster, we’re starting to wish we had access to the software to test for ourselves. If the next iteration of SPECviewperf updates its SNX test to 10, this performance boost should be reflected. Alas, we’re just going to have to wait and see if NVIDIA agrees with that.

Speaking of SNX, AMD has said that it’s included OpenCL optimizations for the tool’s Analysis and Simulation features, as well as advanced studio mode. OpenGL optimizations hit PTC Creo, as well as support for order-independent transparency and vertex buffer objects. Support for order-independent transparency has also been enabled for SolidWorks’ RealView feature. 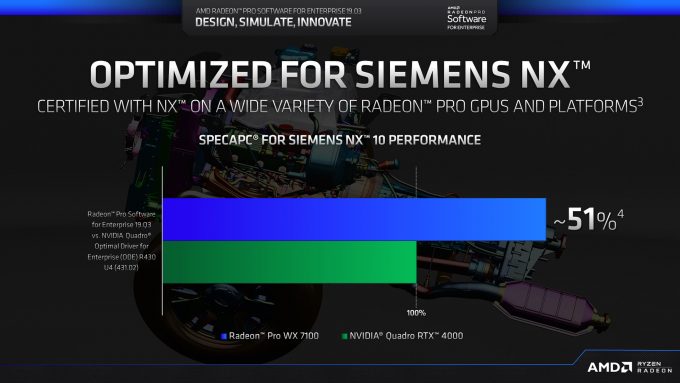 Not surprisingly, this driver release has also bundled in some ProRender optimizations, and AMD has announced support for the plugin in the upcoming SolidWorks Visualize 2020. This is actually pretty big news, since this software has been CUDA-only up to this point. It’s also a seriously cool piece of software we hope to be able to revisit at some point, doubly so now that we know it will end up supporting both AMD and NVIDIA.

To learn everything else there is to know about this driver, you can check out Alexander Blake-Davies’ blog post, and then grab the download.