At Computex a couple of weeks ago, AMD announced two sets of products: Zen 2 CPUs, and Radeon Navi GPUs. At this week’s E3, the company is unveiling a lot more, and because time is limited at such a venue, we can assure you that there will be even more to talk about in the weeks ahead.

At press briefings ahead of the public unveiling, AMD deep-dived into its Zen 2 and Navi architecture, with experts on hand (including the architects themselves) to fill us in on pretty much as much information as we could handle before it began to seep out of our ears. That said, this post is going to be abbreviated, but will be covered in more depth as time goes on, and especially in the full review. 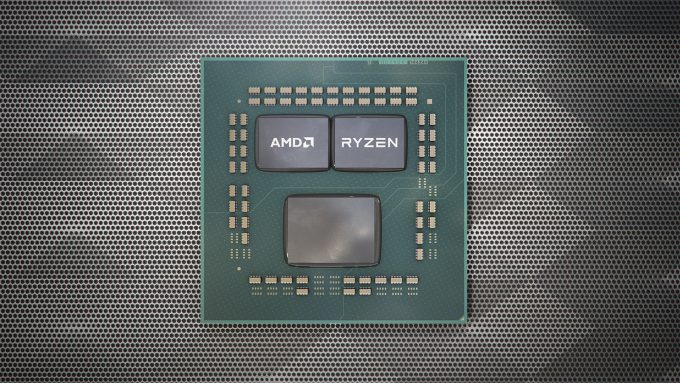 AMD CEO Lisa Su focused largely on three different Ryzen 3000-series models at Computex, but the secret of two more models being rolled out quickly became exposed. AMD is topping its 7nm Ryzen lineup at $499 for launch, a price point which revolves around the Ryzen 9 3900X.

As impressive as the bigger chips are, though, the major value proposition could prove to be the Ryzen 7 3700X. It’s 8-core, 65W, tops out at 4.4GHz, and costs just $329. For creators who can afford the upgrade, we’d definitely suggest eying the 3900X, because if your workloads can actually take advantage of many threads, then you’re going to see a big improvement to performance.

AMD highlights this kind of scaling in this slide: 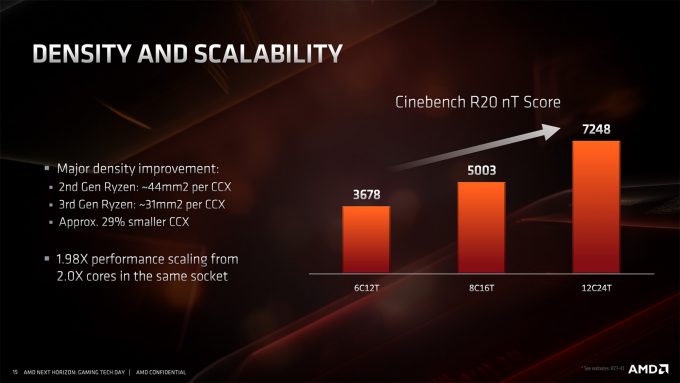 You might have noticed some additional models in that huge table above. Coming out in September, we’ll see AMD’s 16-core Ryzen R9 3950X, which was very quickly announced at the end of the E3 keynote, along with something else special. This will be the top end chip for Ryzen for some time now, since they can’t add any more chiplets to the package. Thankfully, Threadripper’s TR4 package is much larger, and will skirt that problem, as well as allow for more PCIe lanes – if you are in need of more than 16 cores.

The fact that a 16-core is coming to the AM4 platform is simply incredible, especially when you consider Intel’s LGA1151 platform still tops out at 8-core (9900K). It won’t be cheap at $749, but it’ll definitely be a compelling platform for future upgrades too. Going from an 8-core CPU one year to a 16-core the next, on the same platform? Outstanding scaling options. However, it does raise questions on what AMD plans to do with Threadripper. We know EPYC has 64-core CPUs, so maybe that’s what we expect to see in the future. 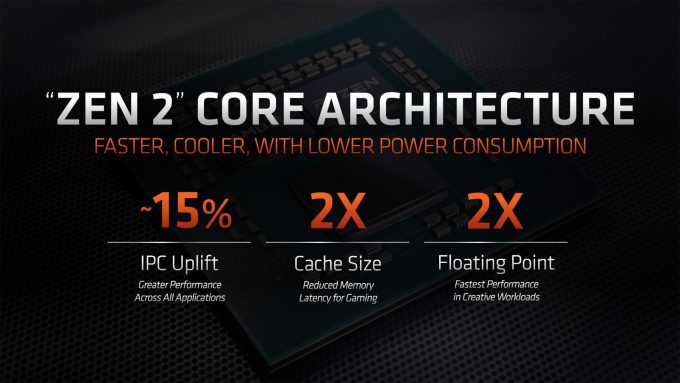 At the bottom of that massive table above, is the updated 3200G and 3400G, the APUs of the bunch. Unfortunately, these are not based on Zen 2, and the graphics solution hasn’t been overhauled either. That said, the GPU components get a boost, so gen-over-gen, there is still going to be a notable difference in gaming performance.

Here’s where things get really interesting. During one briefing on Zen 2, we were told that memory issues experienced with previous Zen chips was basically gone, so you should not stress about being able to hit 4000MHz and beyond. When we heard this, we immediately thought of the APUs, but since they are still based on the last-gen hardware, they will still be limited to lower memory speeds. For Zen 2, though, AMD has said that it’s demonstrated DDR4-5133, so it’s safe to say that memory overclocking will be a lot more fun on this next generation of AMD CPUs. 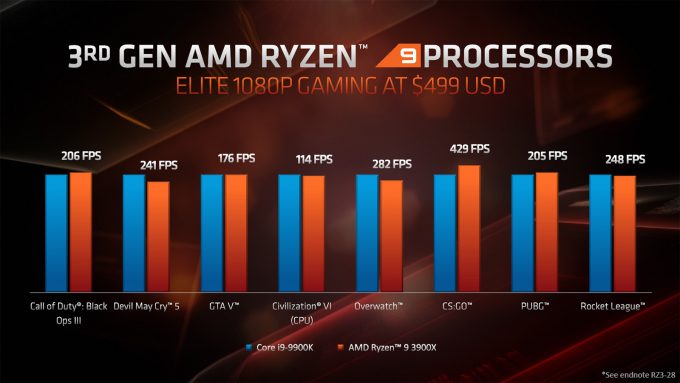 With the previous Zen-based chips, 1080p gaming performance was a bit of a thorn in AMD’s side. With Zen 2, we’re effectively brought up close to par, per AMD’s own testing. We were told that 1080p, both vendors would flip-flop their strengths, so if you are a 144Hz gamer, you shouldn’t have to stress as much over choosing AMD. We don’t always focus on game testing in our CPU content, but we’ll be sure to get plenty of games covered for our launch article. 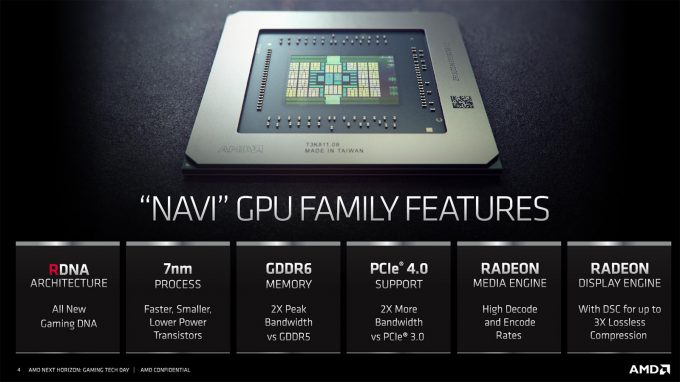 Like the Zen 2 chips, Navi is built on 7nm, which has allowed AMD to reduce its power consumption for a given performance level, which means these cards should test really well for power against the RX Vega series. We’d expect it to draw more power than the RX Polaris series given the expected delta in performance. 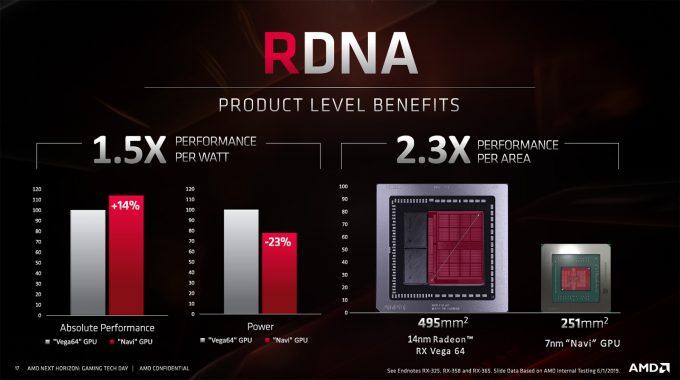 The Radeon RX 5700 XT and RX 5700 are the two launch cards for Navi. Both feature the same PCB design, outside of the fact that the non-XT has six power phases instead of seven. The biggest card has 2560 cores, while the non-XT has 2304, and as is probably obvious from the picture (below), both cards feature different coolers.

The XT’s shroud almost looks broken, but it’s very much designed like this on purpose to aim in noise-reduction during low-load. Effectively, it should simply disappear unless you are gaming. We’re not entirely sure how much benefit it’d actually have, but at least the card is interesting to look at. What’s interesting is that both the shroud and backplate are made out of aluminium, instead of plastic. And yes, that really is a large dent in the side of the XT. 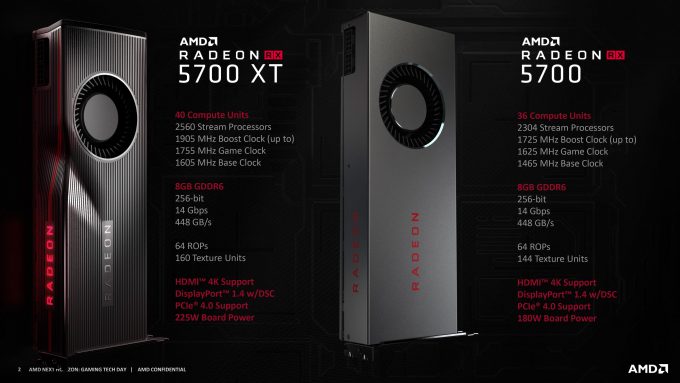 Both GPUs sport 14Gbps GDDR6 bandwidth, and have 64 ROPS, while the 5700 XT has 160 texture units, and the 5700 has 144 texture units. Both of course also support PCIe 4.0, which has been a major part of AMD’s marketing, and for seemingly good reason. During our briefings, we were shown a DaVinci Resolve demo of 8K playback which was instantly improved through the PCIe 4.0 bus. We were skeptical until we learned that the entire project was cached into memory on both configs, so there were no I/O bottlenecks to interfere.

With this demo, we’re talking 8K/60 pro footage, so not many gamers are going to be able to take advantage of that. Creators on the other hand could benefit hugely. Don’t fret, we’ll be taking a creator look at these cards as soon as we can, as we did with Vega and the Radeon VII.

With GPUs, it’s not just the hardware that matters, but also the software. AMD had lots to talk about with its Radeon Software, including three major new features. Anti-lag is a feature that takes DX11 and DX9 games that are GPU-bound and efficiently reduce the input-to-display response, with some examples of performance changes seen here: 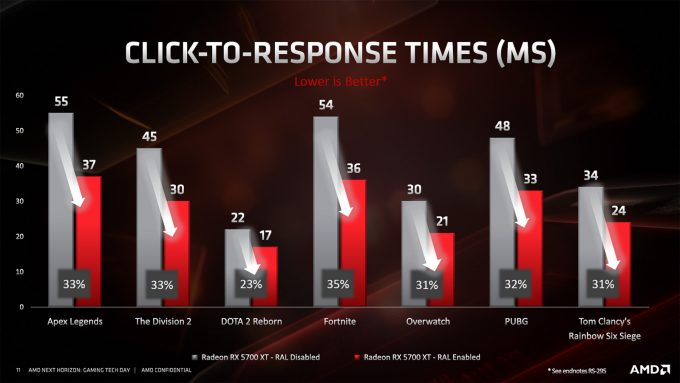 Admittedly an even cooler technology shown off is image sharpening delivered through a feature called Contrast-Adaptive Sharpening (CAS). This is AMD’s answer to NVIDIA’s DLSS, at least to some degree, though it’s one that doesn’t require advanced hardware to use. This tech effectively takes a scene and sharpens the least contrasted parts. Things like roads in F1 2018 should look noticeably sharper, whereas detail in the distance may look the same. 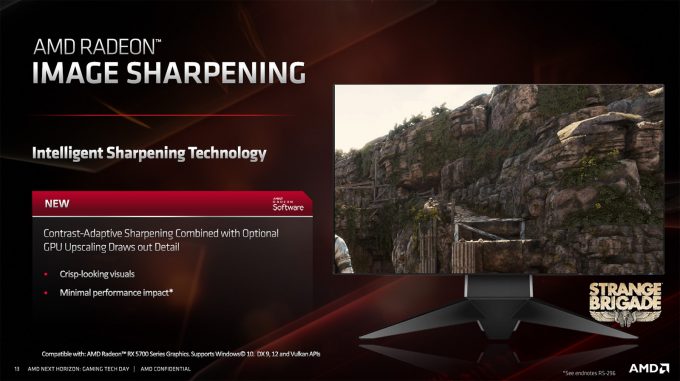 CAS will work really well if you run a game at a non-native monitor resolution, but allow upscaling to take place. Effectively, a 1440p game should look similar to native 4K, which is something we have a hard time believing, only because we really love crisp surfaces. But, imagine the potential of running a game at 1440p and seeing crisper detail. IT might not be native 4K, but it will run amazingly in comparison.

The best part about CAS is that AMD says it will not hit performance really at all. At most it should hit it about 2%, which is only a few frames at the top-end of the FPS range. This is one feature we’re definitely interested in testing out.

FidelityFX was another thing announced that envelopes CAS and other forthcoming features. It’s going to be a part of GPUOpen, meaning that the effects will work on any GPU, not just AMD’s. This means that game developers could easily implement this into their titles, and they will work for AMD and NVIDIA without issue, and even Intel. Naturally, AMD may have a performance advantage, but nothing would stop competitors from tuning the code for their own.

At the E3 keynote by AMD, the prices were finally revealed. The top-end RX 5700 XT will be $449, and the RX 5700 will be $379. both will be made available at the same time as the 3rd generation desktop Ryzen CPUs, July 7th this year. However, at the very end of the stream, AMD also showed off not just a surprise announcement of the 16-core 3950X, but also a 3rd Navi. This special edition 5700 XT 50th Anniversary card features black and gold on the shroud, and is pre-overclocked by an extra 75Mhz, and will be available exclusively through AMD’s online store for $499.

With as much information that was unleashed on us during a full day of briefings, we really hate to speed out a post like this, leaving so much on the table regarding architecture. We’ll be covering some of the more interesting aspects of this unveiling over the next few weeks, as we can review all of our materials, and maybe get some confirmation from AMD on a couple of things.

Other tidbits we’ll leave you with is that 7nm+ is on track, and Zen 4 is already in the design phase. That’s really good to hear, considering that Zen 3 is still a ways out. We’re already excited to see what AMD can continue to pull off, because all things considered, the company has done a lot right with Zen 2 and Navi.

Stay tuned for a lot more in the weeks ahead.