Well, here’s a move we didn’t quite expect. According to the rumor mill, AMD is planning to release an update to its monstrous 64-core Ryzen Threadripper 3990X that could bolster capabilities, making it a wee bit more attractive to those who have certain levels of expectations for a workhorse machine. 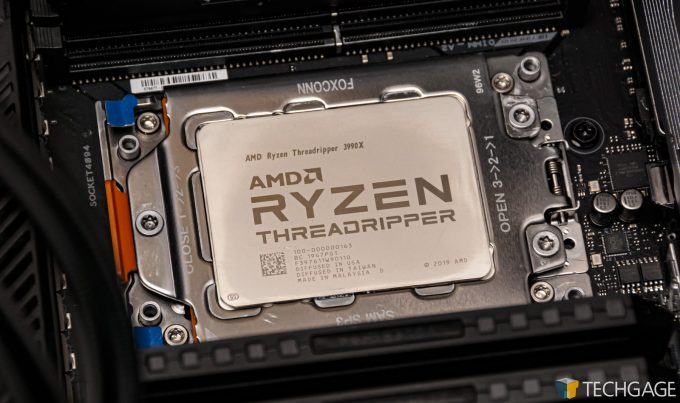 At this point, this is really all that’s known about the 3995WX, except for the fact that it’s allegedly set to launch on July 14, which is notably one week exactly after the launch of the Ryzen XT chips (which we’re in the process of getting tested). If this 3995WX does become a reality, then it seems likely that more consumer-targeted Threadrippers will come next year, following the launch of Zen 3 later this year. That means current owners of Threadripper third-gen chips won’t likely need to worry about that new alluring model anytime soon.

The naming of the 3995WX is interesting, because we’re seeing a return to how AMD styled the second-gen Threadripper series, where the 2920X and 2950X took care of up to 16 cores, while the 2970WX and 2990WX doubled their respective core counts. Those WX chips retained the same capabilities of the regular X ones, however, whereas WX with this alleged 3995WX would imply an augmented feature set.

What we’re most curious about – assuming this is true – is what AMD will price this chip at. The original 3990X was priced at $3,990, but it’s been easily found recently for hundreds of dollars less (eg: $3,599 as of the time of writing, though it has been even lower.) An eight-channel memory controller means that this potential chip will not likely slide into a consumer TRX40 system, but that won’t likely matter to new system builders or those buying a prebuilt (which is likely what this would be geared towards, given its Pro focus). If this 3995WX does prove true, then this year will be even more interesting for CPU launches than we were expecting.