Last December, AMD pushed out one of its biggest driver updates ever in the form of Catalyst Omega. This mega-patch consisted of a large number of bug fixes, performance boosts, and some feature additions. At the time of its release, AMD made it sound like such mega-patches would become an expected thing each year, and with the upcoming “Radeon Software Crimson Edition”, it looks like the tradition begins.

AMD has confirmed that it will in fact release a huge patch like Omega each year going forward, and each will be named after a shade of red. That’s a neat piece of trivia, but what’s important is just how much engineering work will go into one of these. The focuses might be shifted with each release, but one thing’s for sure: every Radeon user will want to snatch these drivers as soon as they become available.

With Crimson, AMD had a couple of goals to achieve. First, the control center needs to be easy to use, and second, it needs to be fast. Oh, and third: it needs to look great. With no hands-on experience with Crimson, I still think it’s safe to say that the company has excelled at the latter goal.

A frustrating aspect of accessing a GPU driver’s control center can simply be waiting for it to start up. Sometimes, it can take so long that you can begin to question whether or not you actually opened it properly. Well, there won’t be much questioning like that going on with Crimson, or at least we hope. AMD has dropped the previous .NET base and has instead gone with Qt, a popular open-source and cross-platform application framework. Based on this fact alone, I’d wager that AMD’s future Linux driver will look mostly identical to the Windows variant.

At the “Radeon Settings” main interface, you’ll be able to choose from different tabs up top. Once one is clicked, the section will open, and those same tabs will move to the bottom. The Gaming tab can be used to adjust per-game profiles, which as the shot below highlights is so granular, it even lets you control an overclock and power limits on a per-game basis. That’s pretty neat, and would allow someone to give a certain rough game a little bit of a boost while keeping the card stock (or even unclocked) for simpler titles. 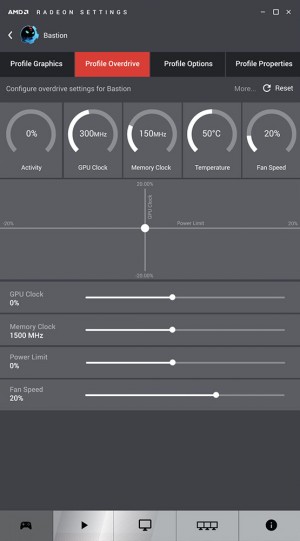 In addition to the Gaming tab, there’s also Video. Here, you will be able to select from a choice of preset video profiles, or create your own.

While I don’t have a screenshot of it, the Eyefinity tab is worth pointing out. With the current driver, dealing with Eyefinity is simply a chore; finding the right area can take way too long. With this dedicated menu, that issue is gone. Interestingly, AMD said that it improved its monitor-detection algorithm, so hopefully, the driver will be able to correctly detect the proper orientation of connected displays. How it could do that, I truly have no idea, but I’d expect it to be hit-or-miss.

AMD hasn’t given us a hard date for when Crimson will drop, but I wouldn’t expect it until later in the month or perhaps even early December. Based on what’s seen in these screenshots, I’d say the wait should be worth it.