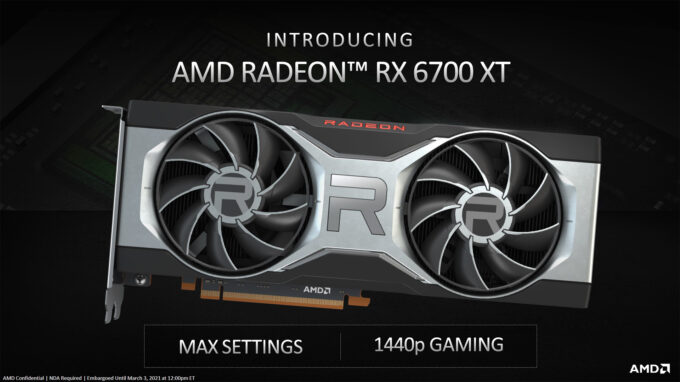 AMD says that its new Radeon RX 6700 XT is the “sweet spot” for 1440p gaming, although we’d imagine that it’d also be suitable for quite a bit of 4K gaming, as long as you’re willing to tone down the graphics settings. If not, many esports titles are likely to run on this card just fine at 4K. Likewise, a card with this performance profile should be excellent at 1080p, and pretty great at ultra-wide – unless we’re talking high-refresh rates.

Whereas the first three RDNA2-based cards released so far bundle a 16GB frame buffer, the RX 6700 XT cuts that down to 12GB. We wouldn’t say that we’re at the point where even an 8GB frame buffer is a real problem, but there are current games that have been known to push beyond 10GB, so having 12GB at-the-ready isn’t going to hurt the future-proofing aspect of this card.

The performance slides AMD provided pits the RX 6700 XT against the last-gen NVIDIA GeForce RTX 2080 SUPER and last-last-gen GTX 1070 Ti, and shows it beating them in Assassin’s Creed Valhalla, Borderlands 3, and Cyberpunk 2077 – all at 1440p. It would have been nice to see a direct example to a current-gen NVIDIA card, but maybe AMD hasn’t been able to find one available for sale, either.

On that note, AMD did comment a little on the ongoing supply issues, largely encompassing the fact that the company is doing everything it can to keep supply healthy. The company said it won’t be going the same route as NVIDIA and crippling the mining performance on the RX 6700 XT, but did stress that the new card is focused squarely on gamers. And as that may be, we’ll be sure to include the card in a creator GPU performance article later this month (along with the new RTX 3060).

While it’s the lowest-end of the RDNA2 line-up now (despite still being pretty high-end), AMD says that you can enjoy ray tracing on this card at 1080p with playable frame rates. That’s good to hear, and something we’re looking forward to testing, as it’s been a few months since we’ve last tested RT on Radeon (or at all). 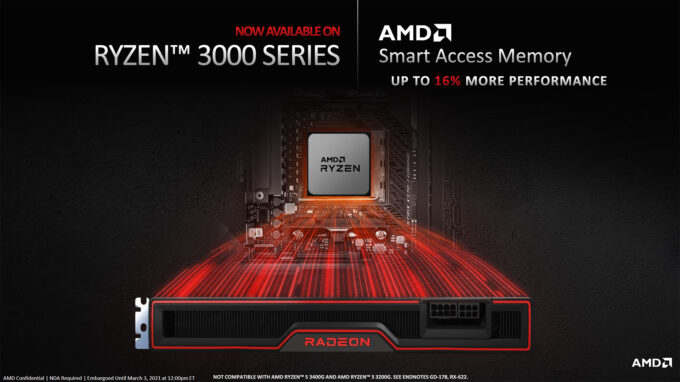 AMD had a bit of a surprise during its RX 6700 XT unveiling. Not only does the new RX 6700 XT support AMD’s Smart Access Memory (resizable BAR), that feature is being extended to owners of the previous-generation Ryzen 3000 series processors. You will need to grab your motherboard’s latest EFI to take full advantage (and subsequently enable it in the EFI itself).