While there are far fewer people attending in person this year, Computex has officially kicked off, and it’s already led to some intriguing announcements. So far, it seems to be AMD that’s hit the ground running the fastest, and perhaps even the hardest. The company’s major focus this year is on notebooks, but for desktop users, Ryzen 7000 and the AM5 platform have been teased. 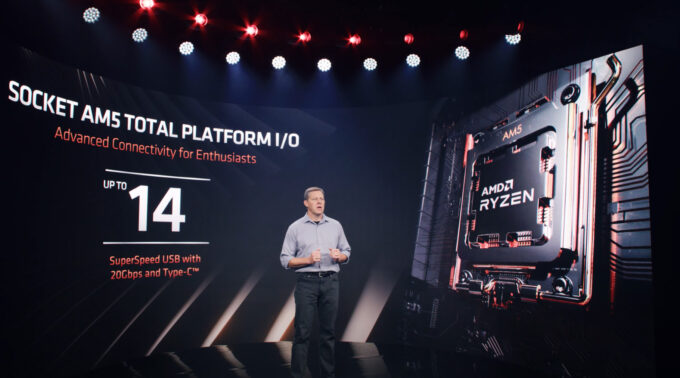 On the notebook front, AMD reiterated its advancements first announced at CES 2022 with its Zen 3+ gaming notebooks that ushered in support for DDR5, PCIe 4, and USB 4. At Computex, the company notes that it’s next tackling the ultrathin market with its U-series processors. These chips are said to offer 45% faster graphics, 27% faster 3D rendering, as well as 18% better office-related performance (and efficiency).

While ultrathins are regularly associated with business, AMD notes that these slim notebooks will also be good for gaming, thanks to the inclusion of RDNA2 graphics – and perhaps even more importantly, support for FidelityFX Super Resolution. With Super Resolution, games can run at lower resolutions, while being upscaled to your display’s native resolution, which seems perfect for platforms with modest GPUs.

Providing a real-world example of what you could expect: using ASUS’ Zenbook S13, an ultrathin weighing just 2.2lbs, Godfall can hit 60 FPS at 1080p while using Super Resolution. Without the SR feature, games like CS: GO and League of Legends can easily exceed 100 FPS, while Shadow of the Tomb Raider and Final Fantasy XIV hover around 60 FPS. 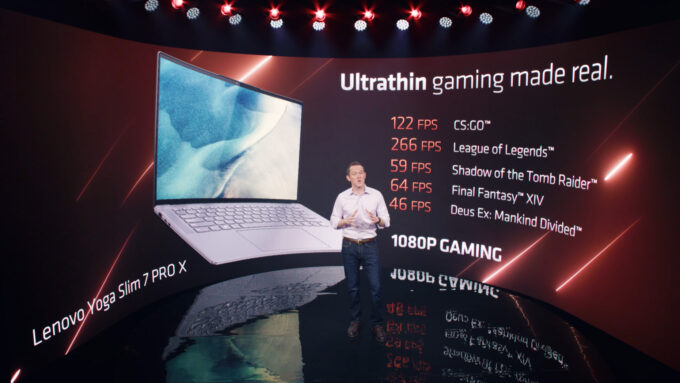 On a similar note(book), AMD recently announced its Ryzen 6000 series for business, and at Computex, the company notes that it expects 60 options to ship this year, which is a 23% improvement year-over-year. With the explosion of people moving to working from home, it’s pretty important that employee notebooks not just offer an ample feature set, but also deliver strong performance – hence the highlighting of improvements to efficiency in office workloads. 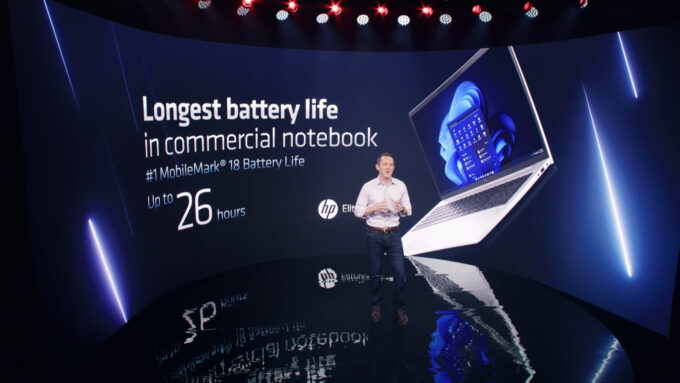 Similarly, AMD boasts about a 45% improvement to battery-life compared to the competition, something that begs for reviewer testing.

Continuing on, AMD is also announcing new Mendocino notebooks, Zen 2-powered machines that are squarely targeting the market largely occupied by Chromebooks. Prices are expected to range between $399 and $699, while battery-life is anticipated to be around 10 hours. These notebooks will sport (up to) 4 cores and 8 threads, as well as AMD’s RDNA2 graphics, and interestingly, they will support either Windows 11 or Chrome OS. 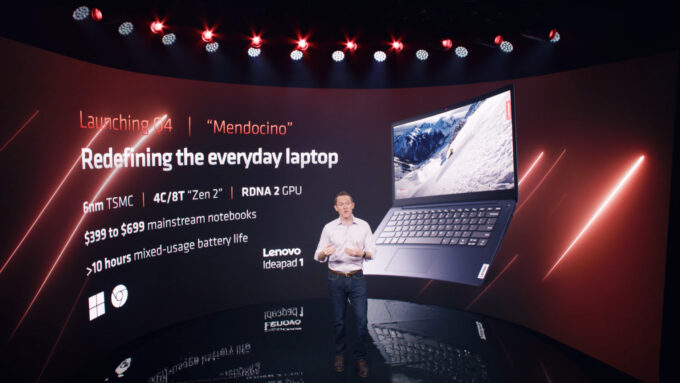 Announced at last year’s Computex, AMD’s “Advantage” laptops are those that have to meet certain standards, so that when you purchase one, you know you’ll be able to enjoy high-end gaming. That can include at least a 144Hz refresh rate, 100 FPS gaming, fast load times, decent battery-life, and so on. 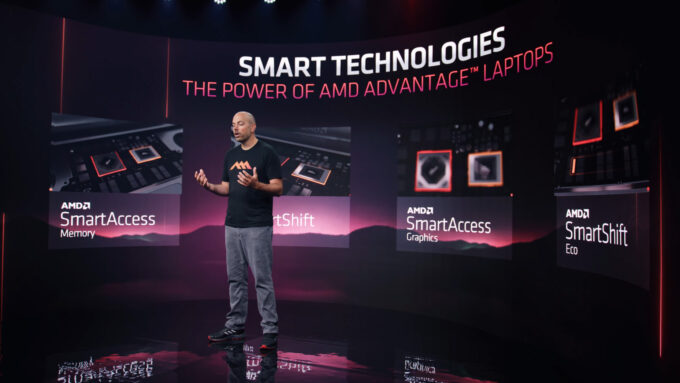 Advantage notebooks will feature both an AMD CPU and GPU, and offer a number of technologies that complement each other, including the family of “Smart features”, like SmartAccess Memory, SmartAccess Graphics, and SmartShift Eco. 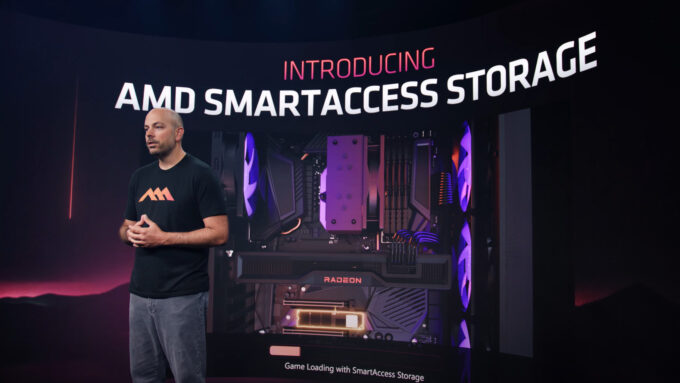 A new “Smart” feature is SmartAccess Storage, one that ties into Microsoft’s DirectStorage to optimize data handling between the CPU and GPU so that games will load faster, as will their levels. Ultimately, the goal is to be able to load huge amounts of data quicker than ever, allowing for more impressive and immersive experiences. While SmartAccess Storage is AMD’s own branding, the company’s competitors are eager to get their own similar solutions out the door, as well.

Alright – we’re sure you’re dying to hear about some desktop parts now, and while you may be craving even more information, what we’re being teased seems hopeful. First off, AMD CEO Lisa Su talked-up some of the benefits of its current-gen AM4 platform, including the fact that it’s supported five generations of processors spanning four process nodes, and over 125+ different SKUs have been installed in over 500 motherboards. Those are some pretty impressive, and hard-to-beat stats. 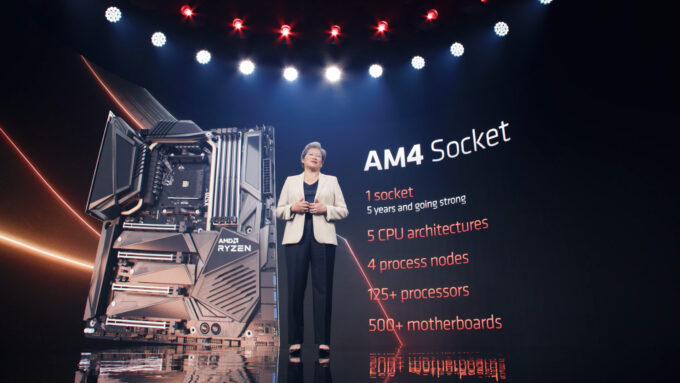 With its upcoming Zen 4-based Ryzen 7000 series processors, AMD’s building chips around a 5nm process node, and a brand-new AM5 platform. 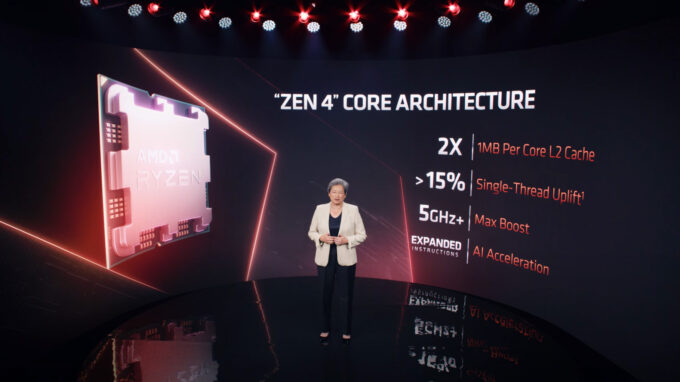 Vs. Zen 3, AMD says that Zen 4 will offer twice the per-core L2 cache, an up to 15% single-threaded performance boost, above 5GHz maximum boost, and new instructions that revolve around AI workloads. 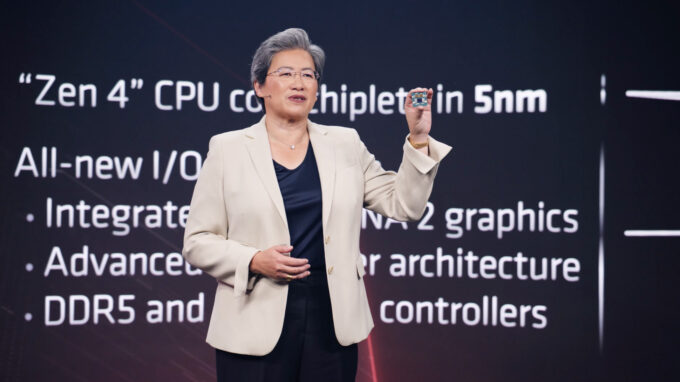 Zen 4 CPUs are going to support two chiplets that pack eight cores each, meaning the Ryzen 7000 series will top out at 16 cores, just like Ryzen 5000. The additional die is AMD’s overhauled I/O chip built on a 6nm process, that for the first time, brings AMD’s RDNA2 graphics to Ryzen desktop processors, as well as adds support for DDR5 and PCIe 5.0.

While CPU coolers built for AM4 use will continue to work with AM5, there are other core differences to the socket itself. There’s a move to a 1718-pin LGA design, and support for up to 170W processors. The LGA aspect is useful to highlight, because it means AM5-bound CPUs won’t have exposed pins, meaning that accidentally bumping or dropping the CPU should not result in ultimate disaster.

On the motherboard front, AMD is producing three chipsets for the upcoming AM5 offerings. At the top-end is X670E, which offers additional PCIe 5 capacity, and a focus on high-end overclocking, while the X670 still delivers quality overclocking capabilities, but doesn’t go all-out in the same way, making it suitable for most users. For those with more modest needs, and simply want to enjoy what Zen 4 has to offer, there’s B650. 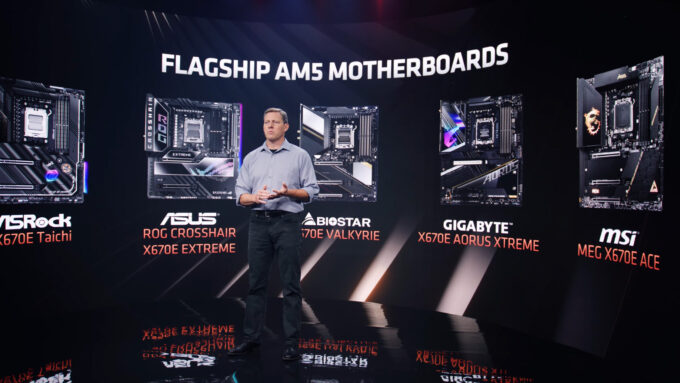 Thankfully, AMD had a couple of performance examples to show off. Using the recently-released Ghostwire: Tokyo, we’re shown that the CPU can at times reach as high as 5.5GHz. That looks and sounds great, but we’ll have to wait and see just how common that will be during most gameplay.

In our workstation-focused Ryzen 7 5800X3D article posted last week, we noticed that Intel’s 12th-gen 12900K beat out AMD’s R9 5950X most often in rendering, so it’s pretty interesting to see AMD using rendering as an example of where its top-end Ryzen 7000 series chip will reverse the roles to topple that 12900K: 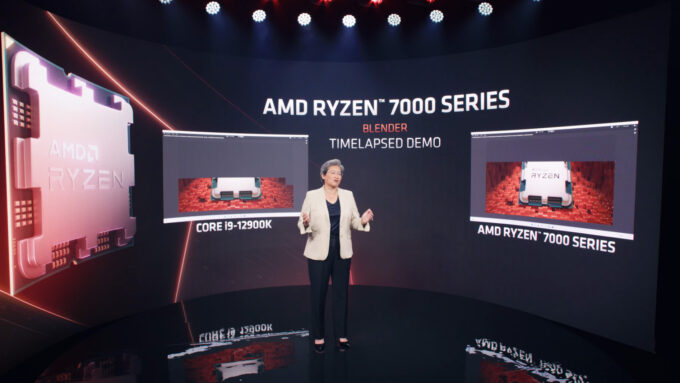 Overall, AMD’s Computex showing this year has been pretty good, although it would have even been better had Zen 4 been launching alongside it! It is good to see AMD taking notebooks of all different categories seriously, and we’re eager to see Ryzen 7000 and AM5 drop in the fall, especially as PCIe 5.0-based SSDs should begin hitting the market.