According to a new article at ArsTechnica covering the release, the really big news here is “XGP”, the new AMD External Graphics Platform, which would allow a discrete graphics card to sit outside the laptop case and connect through an external PCIe 2.0 x8 connector. However, ArsTechnica speculates that Puma will have some trouble gaining the spotlight, which is currently hogged by sub-notebooks (like the ASUS Eee PC) powered by Intel’s Atom and VIA’s Nano CPUs, whereas Puma is more of a direct competitor to Intel’s Centrino platform. 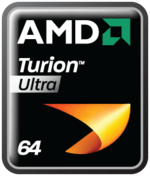 Puma is the first laptop platform AMD has released since it bought ATI, and the combined companies are betting that the emerging synergy between their respective product lines will entice buyers in ways current Intel products cannot match. won’t be the only force to overcome; AMD will also have to draw attention to its new Puma-based products at a time when small notebook and "netbook" designs based on Nano, Atom, and Tegra are soaking up the headlines.