Earlier this summer, AMD launched their six-core Istanbul Opteron processors, suited for the server/workstation environment, and in doing so, consumers had an interesting choice when it came to building their large or small clusters. Launch Istanbul chips carried an “ACP” power rating of 75W (Intel and AMD grade their TDPs differently, so they cannot be directly compared), while a new chip launched today settles in at only 40W.

Not surprisingly, the Opteron 2419 EE isn’t a high-clocked part, but rather becomes AMD’s current lowest-clocked Istanbul part at 1.80GHz. By comparison, the company’s also recently-launched HE parts start off at 2.0GHz and 55W, but overall, the 2419 EE still wins when looking at things from the performance per watt perspective, and that’s what AMD is emphasizing.

Consumers who this is targeted for are those who need strong performance but absolutely need the best performance per watt possible. With the 2419 EE, consumers would be able to fit many more machines into a single cluster, resulting in much higher performance overall, with still-improved power consumption. In particular, AMD mentions Web 2.0 and cloud computing scenarios in its press release.

If there’s one area where AMD wins big with this new launch, it’s in the pricing. Although Intel’s 6-Core Dunnington-based Xeon’s would out-perform AMD’s chip in most tests (similar to the desktop side), that company’s least-expensive Sextal-Core offering is the L7455, at 2.13GHz and $2,729. Compare that with AMD’s $989 price tag on their Opteron 2419 EE. It will be interesting to see if Intel follows-up soon with some more modestly-priced Dunnington offerings, or if the pricing on current models will change soon. 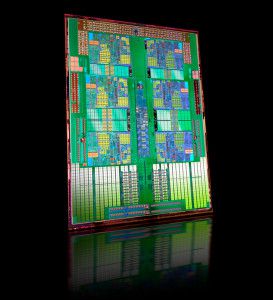