Following-up on its launch of the FirePro S9050 and S9150 server GPUs last August, AMD has revealed a brand-new high-end offering that boasts one heck of an impressive feature: 32GB of memory. Making this feat even more impressive is the fact that this isn’t a dual-GPU card. 32GB for a single GPU is simply staggering.

As you might imagine, 32GB of memory for a single GPU is going to require some serious workloads, and in particular with this card, AMD’s targeting those making use of DGEMM routines. It even goes as far to say that its S9170 can offer 40% more performance than the competition, which would include NVIDIA’s Tesla and Intel’s Phi, although no specific models are mentioned (or comparison benchmarks, for that matter.) 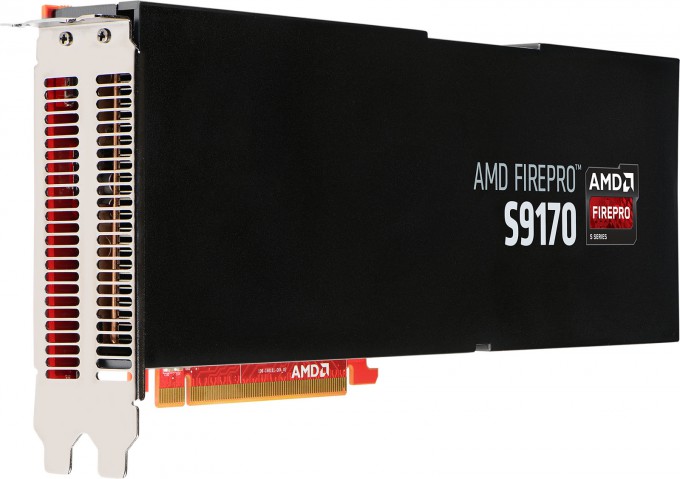 While the top of AMD’s FirePro server stack is the S10000, it’s growing long in the tooth, having released in late 2012. Despite being a dual-GPU offering, it’s barely faster than the S9170 from a single-precision standpoint, and actually falls far below in double-precision (1.48 TFLOPs vs. 2.62 TFLOPs). The S9170 also uses dramatically less power – 275W, versus 375W.

Compared to the other top-end (and more recent) cards in this lineup, the S9170 is in effect an S9150 that uses an updated architecture. It retains the same core configuration, but gains 30MHz on the clock, giving it a minor performance boost all-around.

When used with AMD’s G250 2U server platform, eight of these S9170 cards can be used to deliver a total of 256GB GPU memory and nearly 21 TFLOPs of double-precision performance. With this card, AMD outperforms the Tesla K80, which delivers 2.33 TFLOPS of DP performance, although it falls very short of that card’s ~7 TFLOPs SP performance. Of course, needs and pricing will alter the pros and cons of either card from a consumer standpoint, and of course whether or not upwards of 32GB of memory is needed.

Regarding price, it’s hard to peg an exact one down given the nature of the product, but we were told it will hover between $3~4K – a price point I am impressed to see given the staggering amount of memory the card has (and not to mention its double-precision performance.)