AMD’s Kaveri is Here, And Brings With it a Brilliant HSA Design

AMD’s long-awaited Kaveri APU is here, so for the big question: Was it worth the wait? When compared to the previous-generation, the answer is “Yes”. Kaveri is AMD’s first HSA (heterogeneous system architecture) CPU, which is to say that both the CPU and GPU cores can work together, so that when programs are compiled with HSA in mind, huge performance gains can be seen (eg: a portion of the program will use the CPU, while another might tap into the GPU’s power).

The biggest gains to Kaveri is that a new CPU core is being used, Steamroller, and the IGP is based on AMD’s GCN (Graphics Core Next) architecture. While the CPU core has seen a bit of a performance boost, the IGP has gained a much bigger one. Best of all: The IGP supports Mantle, which could prove to be an absolute boon in the near-future when games begin to support it. 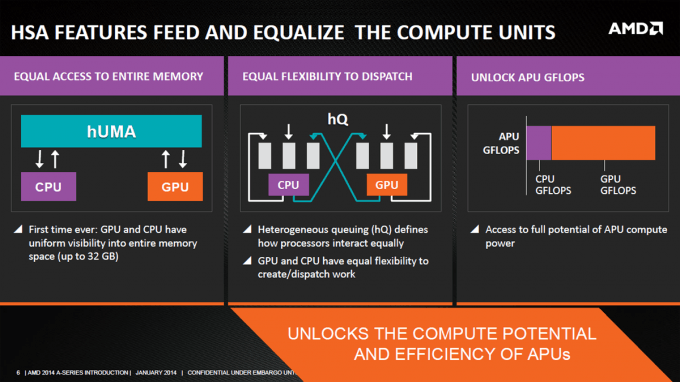 Kaveri’s designed to cap at 12 “compute cores”, which would include 4 CPU cores and 8 GPU cores, and thanks to its HSA design, all cores can access the same system RAM – yet another boon on the GPU front.

When a program can take advantage of HSA, it can tap into both the CPU and GPU at the same time, resulting in total throughput of 856 GFLOPs on the highest-end chip (by comparison, AMD’s desktop Radeon R9 290X GPU is 5632 GFLOPs), which is quite a bit of performance for such a modest chip (modest being that it costs $190).

We’ll take a deeper look at Kaveri in the near-future (testing is lagged due to being swamped with gear at the moment… le sigh), but let’s tackle a couple of things that makes it impressive: 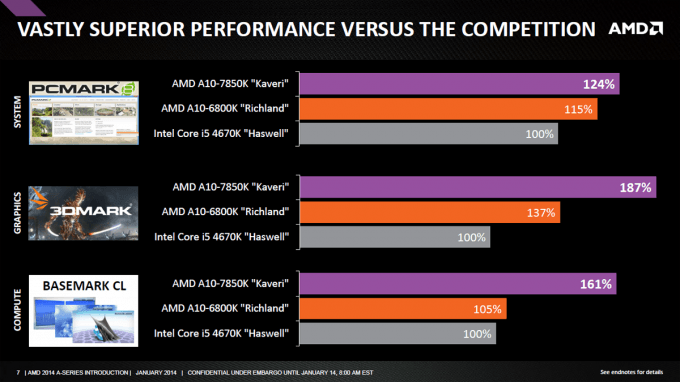 Other performance enhancements include a 4x gain in calculations using LibreOffice Calc, and 2.3x faster in using the sharpen filter in Photoshop CC (both versus Intel’s Core i5-4670K).

Lacking on Richland was CrossFire support for APU+Discrete GPU; that’s been remedied with Kaveri. When the top-end A10-7850K APU is paired with a Radeon R7 240, double the performance can be seen in both BioShock Infinite (40 FPS avg) and Tomb Raider (38 FPS avg).

Real-world examples of AMD’s Mantle tech don’t exist (yet), but once here, AMD promises major gains in performance. Using the A8-7600, the company claims that up to a 3x gain in performance can be seen when Mantle is used instead of DirectX – those are rather major gains, but not so surprising given that even small gains on the low-end will look enormous on a chart. With Battlefield 4, Mantle is being said to increase performance up to 45%.

Alongside Kaveri, AMD is talking a bit about its memory line-up – after all, the faster the RAM, the faster the IGP can operate. As such, the Entertainment kit is spec’d at 1600MHz, Performance at 2133MHz, and Gamer at 2400MHz. 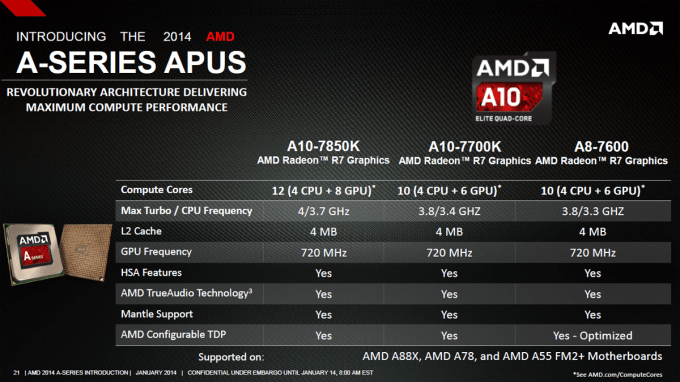 Overall, Kaveri is a rather impressive launch, and a refreshing one in a couple of ways. If you’re looking to build a modest system and want to make good use of a CPU’s IGP, Kaveri knocks that ball out of the park.