As part of its annual release schedule, AMD is releasing its big software update for GPU drivers, Radeon Software. While there are monthly updates and hot-fixes released throughout the year, it’s towards the end of the year we get a big update.

With the launch of the different Crimson and Adrenaline editions, new features were added, such as a whole new UI, Radeon Chill, Anti-Lag, Link, and so forth, this years see a couple new big features, a number of smaller ones, and a new UI. 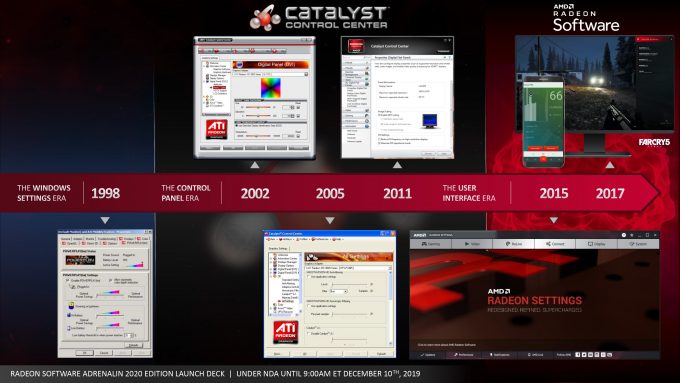 For users of AMD Radeon products, the next driver update will have a new feel, but should still be quite familiar, it’s not so drastic of a change from what we saw back in 2015. AMD Radeon Software Adrenalin 2020 Edition is more than just a new feel, there are a number of improvements on the back-end such as some much-needed improvements to the installer itself. Install time is faster, settings can be kept after updates, but there is a new factory reset option which should mean that something like DDU shouldn’t be needed anymore. 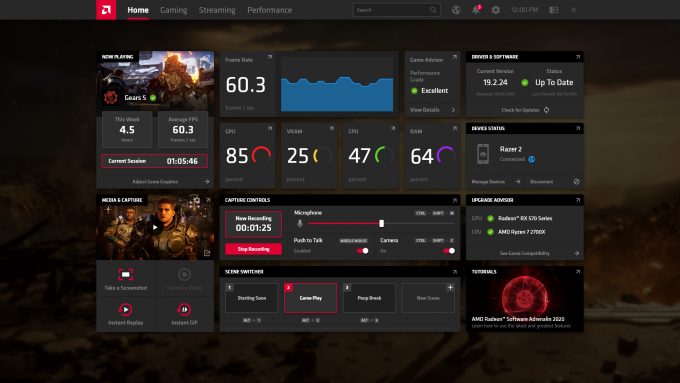 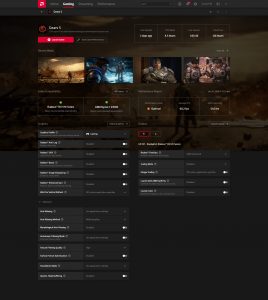 User profiles had a bit of an overhaul, as it sets up with a number of preset options based on what kind of user you are, although this can be ignored and you can set whatever options you like after the fact. Performance overviews have been tweaked to be more informative, as well as being able to set fan curves and some overclocking from within the UI.

There is a new game launcher system, which works as a means of centralizing your games, while being able to set options for each title, something we’ve seen with the likes of NVIDIA’s GeForce Experience setup. It will show at-a-glance information about your system, such as if the drivers are up-to-date, and AMD Link status.

The ReLive functionality has been extended to make it easier to capture and share in-game footage, with screenshots, videos, or even GIFs. There is also a built-in web browser, which by itself may seem odd, but it does actually serve a purpose. It’s a typical Chromium-based browser, but it ties in with the new overlay feature. In effect, this whole new UI is built around being a game overlay, so all the options and settings and features, including the browser, can be accessed while in-game without needing to tab out. For those with multi-monitors, this is less of an issue, but if you only have one display, it lets you keep an eye on in-game, even if a feature such as borderless window mode is not an option for the game. 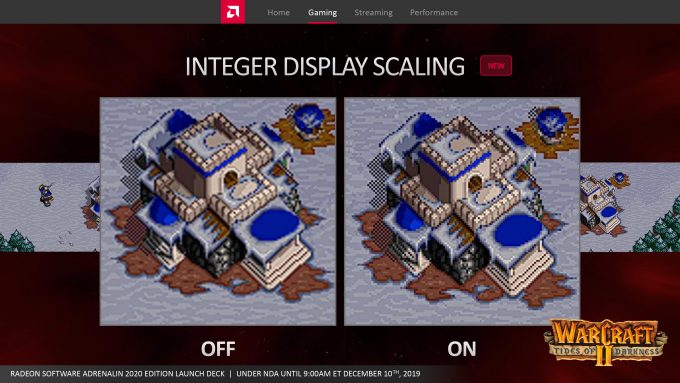 A rather odd feature request that came out of nowhere last year, something that Intel made a big deal about at the time, was Integer Display Scaling. This is an upscaling technique that replaces bilinear or bicubic upscalers, that produces a pixel-perfect sharp upscale instead of something that’s slightly blurred with the two other options. This is something that only a handful will actually use, as this kind of scaling system could be implemented in a game’s engine, instead of by the graphics card. But for older titles that have long since lost development, as well as emulators, this kind of feature is a warm welcome. 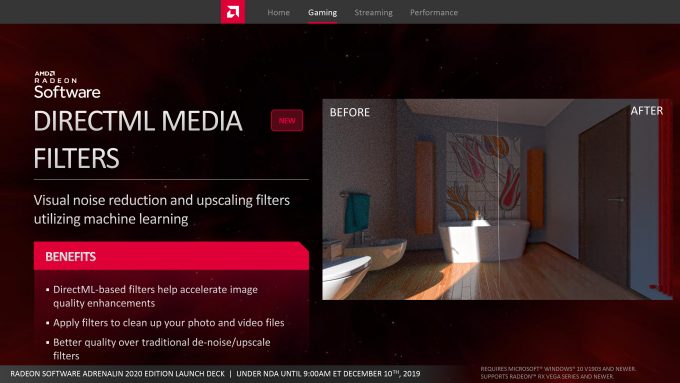 Anti-Lag got an update to support DirectX 9 titles on older GPU hardware from AMD, pre-RX 5000 series GPUs. Image sharpening, the post-processing technique that a few DX12 games have made use of, will now be supported by a number of DX11 titles. There is more granularity in the amount of sharpness, as well as the option to toggle the effect on and off in-game via the overlay. There was a brief mention for support of Microsoft’s DirectML or Machine Learning API, as a means to apply filters to media, such as noise reduction on images or perform upscaling using ML-based techniques rather programmatic options you’d have with classic application filters such as with Adobe Photoshop or Premiere. How this API can be accessed was not detailed, although it will likely be integrated into software that uses DirectDraw and DirectX processing for media playback and display. 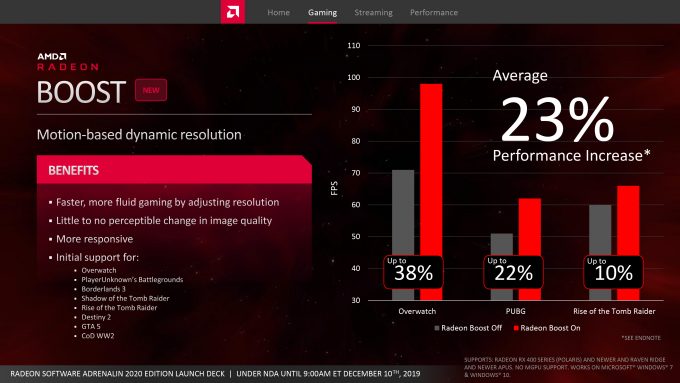 The big new feature to come out of this software update is something called Radeon Boost, and it has nothing to do with overclocking for a change. The idea behind Boost is to improve performance in-game during fast movement. This is done by dynamically changing the resolution of the scene, lowering the detail level so that your frame rate stays more consistent. Quick camera movements, such as when you are doing a 180 to check behind you, the resolution will drop by 50% while the camera is moving, and then rise back up when the camera stops. How much this resolution scales down can be set by the options.

So far, boost is only supported by a number of titles, such as Overwatch, PUBG, RotTR, Destiny 2 and GTA 5. Frame rates can increase by as much as 40% in some cases. Tie this in with variable rate shading, and you can probably get some decent frame rates out of complex scenes. It’s worth noting that Boost does disavble some other performance optimizing options AMD provides, such as Radeon Chill. 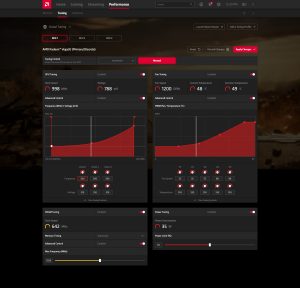 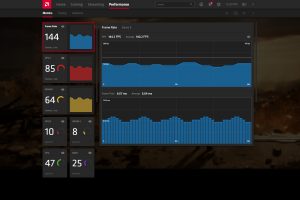 AMD Link has been updated to match the new UI and will be released on Android Today, and iOS in a couple of weeks time. Link is what allows you to play your games on a mobile device by having it rendering on your main PC and streamed to your phone or tablet. Sadly, there is no option for this for other PC users at this time, but there are many alternatives for that. A new codec is supported, x265, and bit-rates of up-to 50Mbps. This is mostly to tie in with the new options available on Navi GPUs, as well as match the new UI of Radeon Software.

All the performance enhancements for games get released throughout the year, so there are no big performance boosts from this driver update, unless you enable Radeon Boost in a select number of titles. It’s still impressive to see these new features rolled out each year, and we’re glad to see AMD continue with the tradition.