We learned in January that AMD was planning to make its Ryzen Threadripper PRO processors available directly to consumers in March, but we weren’t quite expecting the company to waste basically no time at all into the month before pulling the trigger. Starting today, Threadripper PRO processors and supporting sWRX8 motherboards will begin landing at retail, including Newegg, which currently lists the three available SKUs. 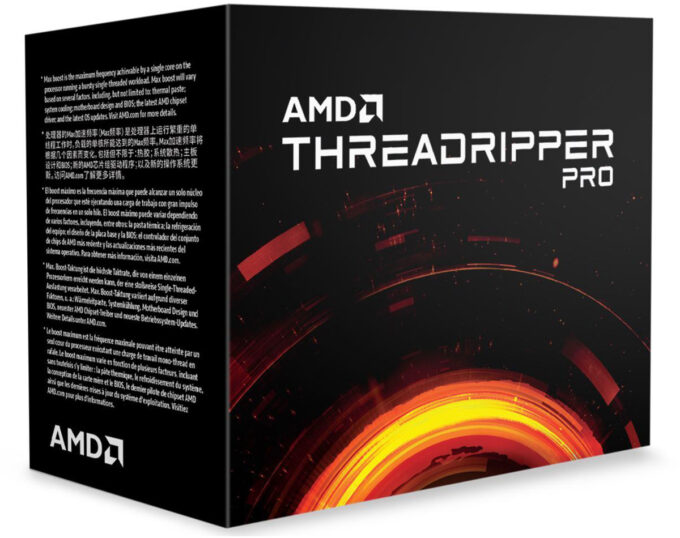 AMD’s Ryzen Threadripper PRO series borrows a number of traits from the company’s enterprise-focused EPYC. That includes an eight-channel memory controller (vs. four on Threadripper), and an increase of memory support from 256GB to 2TB. ECC support has also been bolstered, allowing you to plop RDIMMs or LRDIMMs in. You can still use unregistered DIMMs if you want to, however.

In addition to the AMD PRO security features (eg: Secure Processor, Memory Guard) that have also been unlocked on this platform, the number of PCIe lanes has also seen an increase from 88 to 128. Whether you’re looking for seriously strong memory or PCIe bandwidth, Threadripper PRO will deliver it in droves.

The table above can highlight some other differences between the two Threadripper series. Generally, the PRO variants will have slightly reduced clock speeds, so current Threadripper owners don’t need to fuss over that, at least. The PRO variant is really aimed at unlocking huge memory capabilities, as well as additional PCIe lanes and security benefits. It’s the base for a seriously serious workstation.

Interestingly, AMD’s release today didn’t include the 12-core Threadripper PRO 3945WX, so we’re not sure if that’s coming later, or if it’s going to become a model that’s shoved into the corner and forgotten about. While there are definitely uses for huge memory bandwidth on modest core-count CPUs, we’d assume that most people eying the PRO series will be opting for at least the 16-core.

It’s important to stress that if you intend to go the DIY route with Threadripper PRO, you’ll need to seek out an sWRX8-equipped motherboard, as the TRX40 chipset doesn’t support these processors (and nor would the motherboards support some of the new capabilities).

It may also be useful to note that all of these Threadripper PRO processors are Zen 2-based, just as the desktop Threadrippers are. AMD has been quiet on series refresh, but surely an announcement of a Zen 3-based update will happen before long. With these PRO chips having only been released to DIY consumers now, we’d hope AMD wouldn’t instantly replace them. The regular Threadripper series may be first to see another update.