Here’s something that went completely under my radar. At Computex last week, many vendors showed off their wares built around AMD’s upcoming Threadripper processors, based on the X399 platform. Unfortunately, a series of timing issues prevented me from getting a close hands-on look at an X399 motherboard, and that’s something I regret, because I’ve now learned that X399 carries a little secret:

The socket is designed for LGA processors.

That might seem like a minor detail, so let me explain why it’s not. LGA (land grid array) package designs imply that the contacts are flush with the backside of the chip (examples are seen in the photo below). This design is good for a number of reasons, but most importantly, it increases the durability of the chip from a handling perspective. If you drop an LGA CPU, you’re probably not going to damage anything unless one of the filter caps somehow makes contact with something on its way down. 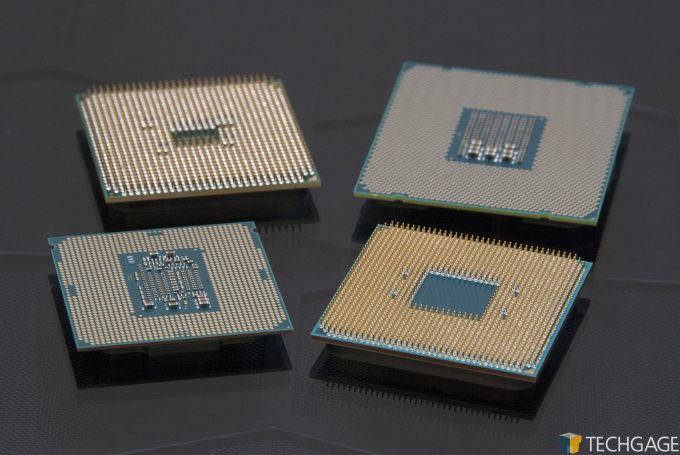 Compare this to PGA, or pin grid array, which is the design AMD has used for the vast majority of its processors for about the past two decades (LGA has been used very selectively at AMD). PGA designs result in a very large number of pins (1,331 on AM4 / Ryzen) protruding out of the chip’s underbelly. There’s nothing inherently bad with this design, but if you’ve ever installed an AMD chip yourself, you know that you can’t be haphazard about it, else a pin could be bent without even trying. If you drop a PGA-designed CPU? Good luck salvaging it. Dropping a PGA chip isn’t the only risk, either: if thermal paste is dried enough, you could accidentally pull the entire CPU out of its socket when removing the cooler, damaging pins in the process.

So, why didn’t AMD go LGA sooner? Well… there’s nothing to actually back up the fact that future AMD chips will all be LGA, so don’t expect it to happen even with Zen2. LGA designs are more expensive to produce than PGA, which I’d have to imagine is the reason AMD has stuck with PGA for so long (LGA is technically superior, notably for increase power stability). But on a chip like Threadripper, with its 4,094 pins (3x Ryzen), LGA was likely an outright requirement, rather than a “Meh, we might as well” kind of move. Threadripper is a massive chip, after all, and with a tripling of the pins, the chance of accidental damage would be heightened.

4,094 is an awful lot of pins for a 16-core chip considering the fact that the Ryzen 7 1800X 8-core is just 1,331, but Threadripper includes other bonuses as well, such as an increased number of PCIe lanes (64, from 24), a quad-channel memory controller (Ryzen 7 is dual-channel), and likely other circuitry to help make this gargantuan design more efficient. Excess pins could also be included as slack, in case AMD wants to release even bigger CPUs over the course of X399’s lifetime (or add other features). 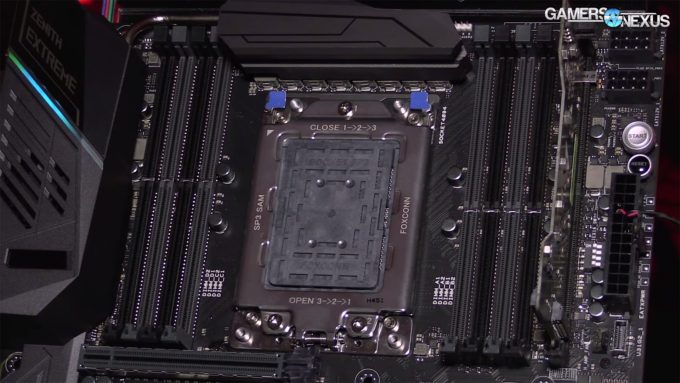 What else? Our friends at Gamers Nexus took a good look at ASUS’ X399 Zenith Extreme motherboard at Computex and found a handful of interesting things. First and foremost, the socket itself is secured with three screws that must be removed in order to install the CPU. This is a big chip, and it clearly requires a rather hardcore design.

Because Threadripper’s IHS (integrated heat spreader) is incredibly large in comparison to current mainstream chips (or even Intel’s biggest offerings), finding the right heatsink is going to be tough. If you’re to buy one that’s tailor-made for X399, expect it to cost more than what you’re used to, because all of that extra copper isn’t going to come free.

In the above video, Steve does give us some good news about that problem: you won’t necessarily need a special cooler for Threadripper. As long as the cooler you do have covers the CPU’s dies, the IHS’ copper design would spread heat efficiently enough where the perimeter of the IHS being exposed wouldn’t matter. Ideally, you’d still cover the entirety of the IHS, but it’s nice to know that it’s not going to be required – as long as the cooler you do choose is spec’d to handle at least 155W.

Ryzen Threadripper is due out “Summer 2017”, likely around the same time AMD ushers its Naples-based EPYC enterprise platform out the door. That brings up another point worth noting: while EPYC chips will sport 4094 contacts just like Threadripper, those processors cannot be used in X399 motherboards due to differing feature sets (eight-channel memory, 128 PCIe lanes, RDIMM (ECC) memory, to name a few).

It goes without saying, but this summer is going to be very interesting for CPUs.