Android Gaming To Get Huge Performance Boost Thanks To Vulkan API

When Khronos unveiled its Vulkan API – OpenGL’s successor – at March’s Games Developer Conference in San Francisco, it was touted as being the ultimate low-level API, one that will work wherever games are. That of course includes mobile devices, which is arguably where such optimizations are needed most. 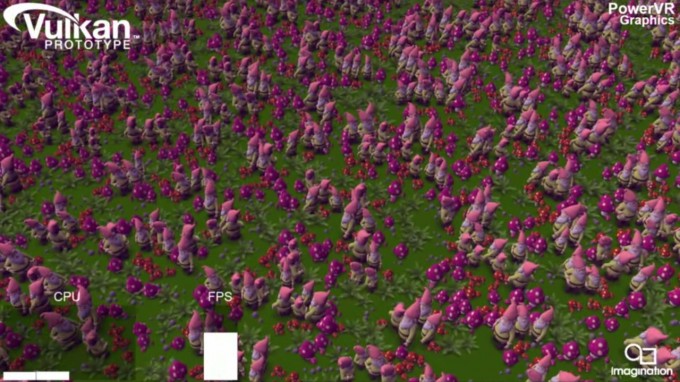 At SIGGRAPH, Imagination Technologies – the company behind PowerVR – showed off what’s possible with Vulkan using Google’s Nexus Player. This device utilizes the PowerVR G6430 GPU, and in a side-by-side comparison, it’s easy to understand just what kind of a difference a mere API swap can make. If you’ve been paying attention to low-level APIs for a while, what’s seen in the video shouldn’t come as a surprise, but it’s worth the watch anyway.

With OpenGL ES, the CPU is required for most of the processing, something that rears its ugly head when the scene becomes more complex as the camera pans out. Up close, both APIs deliver similar performance, but how they utilize both the CPU and GPU greatly varies. While on the OpenGL ES side, we can see the CPU constantly pegged and struggling to deliver more performance, the scene with Vulkan seems to be fairly kind to both the CPU and GPU.

This example is just proof of what we’ve expected for a while: once games on mobile begin taking advantage of Vulkan, the results are going to be very impressive.