We learned yesterday of Intel’s Thunderbolt 4, the updated standard that improves much of the minimum spec, giving consumers the confidence that their new PC will handle beefy configurations without issue. One way we saw improvement was with the bump from one to two 4K monitor support, and an increase of the minimum PCIe (32Gbps) for data transfer.

In order to adhere to Thunderbolt 4, and earn any sort of qualification, a computer or accessory must hit a number of bullet points, with a big one being direct memory access (DMA) protection with Intel’s VT-d. Clearly, neither Apple or AMD platforms include VT-d, given it’s specifically an Intel feature. Fortunately, though, both companies seem confident in the fact that they will be able to support Thunderbolt in full going forward. 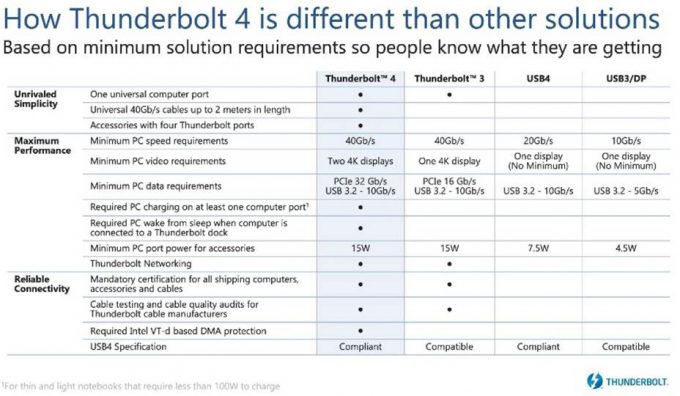 The Verge is reporting that Apple’s new Arm-based computers are not going to impact Thunderbolt support, and that’s obviously a good thing, since no one wants to lose access to their pricey peripherals just because a standard got upgraded or changed (even though Apple is no stranger to unceremoniously killing off connectors).

PCWorld did some sleuthing for the AMD side, and found that while the company obviously won’t offer support for VT-d, it has its own solutions that covers the same ground. Intel could also go the route of licensing VT-d, but it doesn’t seem likely. Even in its current iteration, Thunderbolt 4 is meant to sit behind a PCIe 3 bus, so it’s not as though AMD will be losing any bandwidth, given its PCIe 4 capabilities. But, the crux really does boil down to VT-d and DMA protection.

A big reason it’s worth caring about wide support for TB4 is simply because it’s been treated as a gold standard by many device makers, and with the minimum specs greatly bolstered over TB3, it’s worth eyeing by those running powerful and expansive workstation PCs.