Apple had lots to talk about during its WWDC keynote today, but the star of the show was really the brand-new (and hugely overdue) Mac Pro. The trash bin design is gone, having been replaced with a cheese grater instead, littered with holes for optimum airflow. And that airflow is going to be needed, because Apple’s managed to put two AMD Radeon Vega II GPUs onto a single card, and goes one step further by allowing up to two such cards per system. 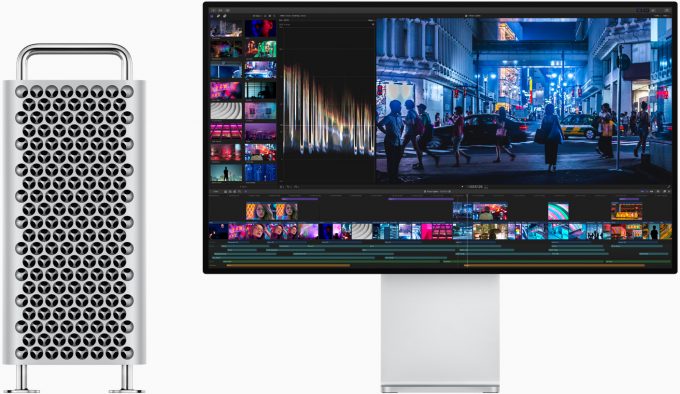 The specs of a fully kitted out Mac Pro are actually mind-blowing, as the price tag will be. The default configuration includes a 256GB NVMe SSD and Radeon Pro 580X, and retails for $5,999. Once you start to upgrade core components (no one using this machine with a 256GB SSD, let’s be real), the price is going to of course increase quite significantly – but just how significantly is up-in-the-air for now, as the units are not expected to begin shipping until the fall.

Those content with a single GPU can opt for a Vega II, which is spec’d similarly to the Radeon VII for PCs. The “Duo” card is exclusive to Apple, and is a performance beast in every sense of the word. We’re talking two Radeon VII equivalent GPUs on the same card, delivering 28.2 TFLOPS of single-precision, and 56.4 TFLOPS of half-precision. Being that half-precision matters most for deep-learning, not ProViz, Apple might be going after a new market with its specs sheet here.

In addition to having 8192 stream processors per Duo card, customers will also be able to configure up to 32GB of HBM2 per GPU. We’re not exactly sure who this much VRAM caters to, but if anyone has a legitimate use case, we’d love to hear about it. Rendering is the first thing that comes to mind when we’re looking to take advantage of more than one GPU, but memory isn’t usually the limitation there. 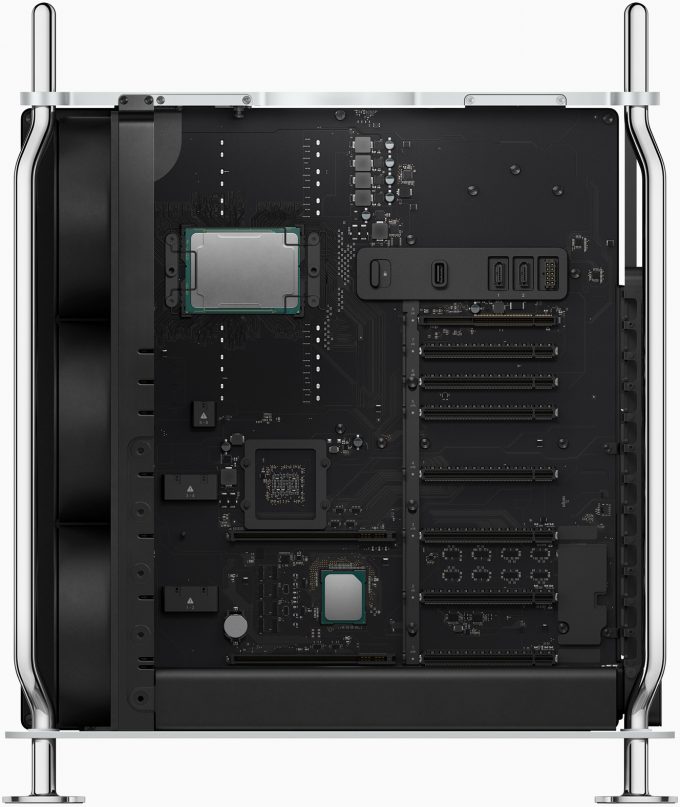 For video, it’s exceptionally rare when we’ll see more than one GPU be used for the purpose. Deep-learning could benefit from huge VRAM, but it doesn’t seem likely that someone would opt for a machine this expensive when NVIDIA’s Tensor cores would deliver better deep-learning performance at a far lower price-point. Much like Android makers continue to put a ton of RAM into their smartphones, it’d be nice to at least have an explanation of how much VRAM could prove useful to people using this machine.

As for actual system RAM, the new Mac Pro offers up to 1.5TB, an amount that would require one of the 24-core or 28-core CPU options. The top-dog 28-core is spec’d similarly to the W-3175X on PC, except Apple’s SKU peaks at a higher Turbo, 4.4GHz (versus 3.8GHz), and offers additional cache.

All told, Apple says the new Mac Pro will peak at 1280W continuous usage, which we assume represents the 28-core CPU and a single Radeon Pro Vega II Duo card. While the WWDC keynote said that two of these Duo cards can be used in the machine, that fact is not mentioned on the product page. We’d assume four Vega IIs and the biggest CPU would draw more than 1280W. 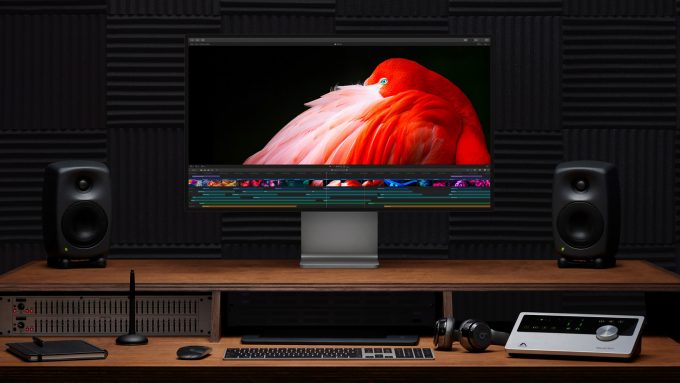 One other interesting aspect of the new Mac Pro is that Apple will be offering a new Afterburner add-in card that will accelerate ProRes and ProRes RAW codecs in Final Cut Pro X, as well as third-party apps. This card supports triple 8K streams or twelve 4K streams. For someone working in Final Cut for a living, an add-in card like this seems like a no-brainer.

As mentioned above, the Mac Pro price starts at $5,999 USD, while a new 6K HDR monitor with similar chassis design is priced at $4,999. The monitor stand will set you back another $999 (not a typo), while a VESA mount will cost $199. You can learn a lot more about the specs and build design on the official product page.