NVIDIA’s GeForce GTX 680 isn’t the hottest-running GPU out there, but if your goal is to eke as much graphics performance from your computer with as little noise as possible, after-market coolers become worth looking at. Arctic is a huge player in this arena, and so it’s no surprise to see that its just-launched Accelero Xtreme III “cooler for enthusiasts” is designed for just such a card. 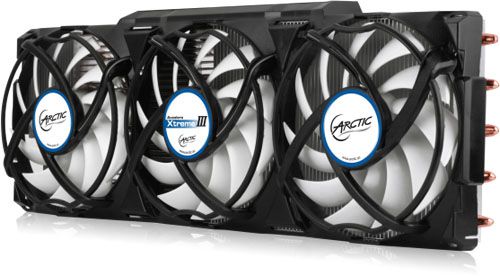 It’s easy to tell just by looking at it why this cooler would be more effective than stock. It features 3x 92mm fans, five heatpipes on either side of the GPU block, a completely finned surface – and cooler aside, includes a staggering 31 RAM and VR heatsinks to install around the board (enter: tedium).

The fans are able to operate at between 900~2000RPM, so at its lowest point, it’s going to be quiet. But what kind of cooling differences can be seen? According to Arctic’s internal testing, load testing reduces the temperature from 69.9°C to 47.6°C in an ambient 25.0°C environment. In addition, noise levels drop from 3.7 sone down to 0.5 sone – for a rather staggering improvement.

Such performance comes a cost, however. The Accelero Xtreme III retails for a suggested $119 USD, which at more than 1/5th the price of a GTX 680 seems rather Xtreme indeed. There’s another catch: the cooler cannot be installed on 680s that have a “double deck” power socket orientation – which unfortunately rules out many of the 680s on the market. But if you have the right card, some serious improvement can be seen if you are willing to splurge.