Are Internet Explorer users less intelligent than everyone else? If a new study conducted by AptiQuant is to be believed, that’s just the case. To reach this conclusion, AptiQuant surveyed 100,000 people that were found through advertisements and search engine results, and in addition to recording the intelligence quotient result from each person, it also recorded the browser being used.

Of the 10 different browsers that were recorded, the bottom four were all Internet Explorer, with IE6 falling into the lowest place possible, with around ~83. The IQ then begins to climb with IE7, but interestingly IE8 users had a higher average IQ than IE9 users. The IQ peak with IE users was about ~94. 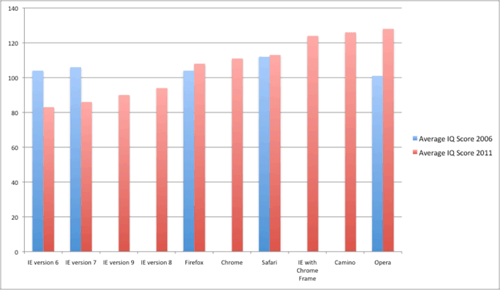 According to the Stanford-Binet IQ scaling, 84 – 116 is equal to ‘Normal or average intelligence’. According to the graph, it appears that Firefox, Chrome and Safari users managed to reach the upper range of this, with Safari in particular ranking the highest with what appears to be 115.

Opera users scored the highest, with an average score of ~127, putting them in the ‘Above average’ segment, and awfully close to ‘Superior’.

While I don’t consider such a survey to be very scientific, the results are interesting nonetheless. The report PDF can be found here, which has some further information that I didn’t cover here.

So who’s with me in wanting to move over to Opera?