The Mac vs. PC debate has been going on for about as long as… well, as long as both platforms have been available. For the most part though, it’s usually the users of each platform that are involved in the debate, but in recent years, it’s been the companies themselves. Apple arguably started it all when they began releasing their Mac vs. PC TV commercials, and while they were humorous, I’m not quite sure how successful they were in turning people away from the PC.

It took quite a while for Microsoft to decide to take action and actually defend themselves, but we began to see the fruits of that a few months ago, with a huge ad campaign entitled “I’m a PC”, which showcased normal everyday people who love their Windows PCs… not some smarmy dude. Now, Microsoft is taking things one step further… by poking at Apple’s pricing.

The mediums Microsoft has chosen for this is both the TV and Internet, and it’s no surprise that this has come about, as just a few weeks ago, Microsoft CEO Steve Ballmer made the rather blunt comment that given the recession, not too many people are interested in paying $500 for a badge. For the sake of not turning a simple news post into an article, I won’t express personal opinions here, as I’ve made them enough in the past.

Regardless of what I think though, the ads are quite straight-forward. Their test subjects are given a certain amount of money, say $1000, and are told to go purchase a PC. On the Mac side, that’s difficult, given the lowest-end MacBook is $999. Rather, one lady ends up buying an HP notebook, valued at $699, and picks up a printer and other accessories as well… and still has $100 to pocket. You can read the link below for more on this, and then put your two cents down in our comment thread. 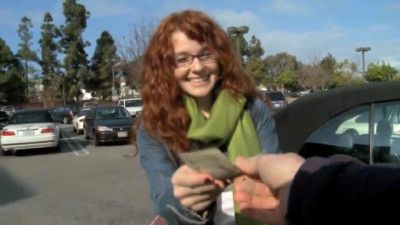 David Webster, a general manager in Microsoft’s central marketing unit, said that while some people are enticed by lower prices alone, some like to think of value in terms of what else they could spend that money on. In the online campaign, Microsoft tries to play up those things. Webster said Microsoft is also trying to play up the variety of the PC marketplace, saying a customer is likely to get “a better fit” with Windows.