Not one to shy away from combining the best of both worlds, ASRock is at it again striking a blow for budget conscious users everywhere! Some of you may remember its earlier LGA775 offerings which combined AGP and PCI-E slots, along with the ability to use DDR2 or DDR3 memory on the same motherboard. These two solutions gave consumers the ability to upgrade specific components individually rather than put up a large amount of money for a complete system change. This time around, it has taken Intel’s latest and greatest P67 chipset and given it LGA1156 support, rather than the native 1155.

To achieve this modern marvel of twisted technology ASRock found that the P67’s DMI interface is the same as the P55 chipset so it added the P67 PCH to the feature set and a LGA1156 compatible socket on the board. In layman’s terms, you can now upgrade your motherboard and reap some of the rewards that go with the new chipset but still keep your current LGA1156 processor. This could help with some of the unhappy grumblings about the limited overclocking potential of Sandy Bridge processors without an unlocked multiplier.

The board itself looks great but the feature set is a mixed bag in my opinion. You gain the most current chipset and the UEFI BIOS, USB 3.0 and SATA 6Gbps support along with improved performance from the controllers thanks to an increase in throughput courtesy of said chipset. On top of that there is a LED debug display, onboard power and reset switches and ASRock even had the forethought to include mounting holes for both 1155/1156 heatsinks, but also a second set of mounting holes for LGA775 heatsinks.

That’s good right? Well, yes but you sacrifice SLI and Crossfire support due to the lack of a second PCI Express slot, but the biggest problem with this board is that even though you are now sporting a new chipset, you do not gain any improvements of the Sandy Bridge chips themselves, which is really where a P67 system shines.

While the benchmarks do show an increase in performance they simply are not large enough to make this a truly viable option for those who are on a budget. I feel that most would be better off saving their money until they can afford a full fledged P67 system. It is a great idea regardless and I hope it sends a message to Intel that backwards compatibility is a good thing. 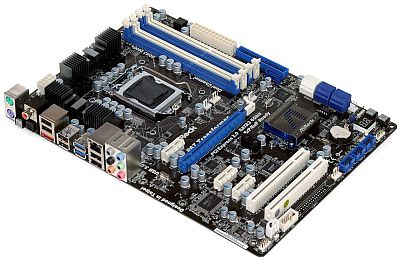 Upgrading to Intel’s P67 will certainly require a new motherboard, but the fact that you won’t need a new CPU appears to be Intel’s dirty-little-secret. ASRock found the secret and exploited it, bringing next-generation performance to today’s processors.