Remember that ultra-cool all-in-one Eee Keyboard from ASUS that we saw at CES earlier this year? Well it turns out that the company is aiming to release it sometime during Q2, most likely in June. That improves upon the Q3 projected date that we were told in January, so things must really be shaping up. According to the Register, the keyboard will come in two flavors, wired and wireless (referring to the display capabilities).

The latter isn’t going to be too cheap, however. The wired version (meaning you’d plug it straight into your TV, making it a less-than-ideal HTPC) will retail for $400, while the wireless version will tack an additional $200 onto that. It’s unknown at this point exactly what kind of wireless technology it will be implementing, but it’s probably safe to say that the connector of choice will be HDMI.

On a semi-related note, are you tired of seeing ASUS plaster the word “Eee” on everything from netbooks to nettops to peripherals and beyond? According to company Chairman Jonney Shih, there’s no sign of the name diluting their product line-up (although if their CeBIT boot is anything like their CES booth, I’d have to disagree just slightly). Either way, the Eee brand is even in the minds of regular consumers, not just tech geeks, so it’s no wonder the company insists on using it wherever possible. 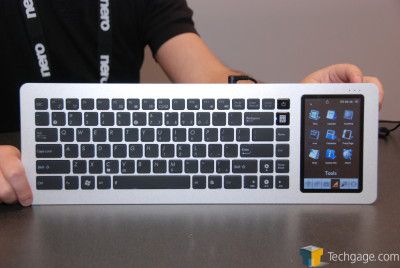 CEO Jerry Shen said the firm was working on two SKUs for the keyboard PC: a wireless version and a wired version – this simply refers to the way they connect to a monitor or TV. He said that given the economic situation it was dangerous to be specific on pricing this far out. But, he said, right now the firm expected the wired version should come in at around $400 (£285/€317), while the wireless version could be anywhere between $400 and $600 (£428/€476).