Think that NVIDIA’s 3D Vision is nothing more than a fad? According to a press conference held earlier this week by the company, that couldn’t be further from the truth, and it has a good handful of reasons to back up its claims. Unfortunately, a lot of what was discussed at the conference can’t be repeated until a later date, but the most interesting tidbit can be… mobile 3D Vision. That’s right, there exists a notebook out there that boasts such support. Is it a surprise that it’s from ASUS?

ASUS touts the G51J 3D as being a “3D Gaming Notebook”, for a few reasons. The first is that bundled in the box is NVIDIA’s 3D Vision kit, which includes both the wireless shutter glasses and receiver. Worried about the fact that 3D Vision requires a 120Hz display, but that’s never seen on a notebook? Don’t worry, ASUS has taken care of that, and I believe that makes the G51J one of the first, if not the first, consumer notebook to feature a 120Hz display.

The question of just how useful 3D Vision is on a notebook has been debated, and in truth, it is quite hard to sell someone on the technology, especially since very few games natively support it. But at the press conference earlier this week, NVIDIA gave news of upcoming support from various game developers, so the support is indeed growing, and when a company like ASUS vouches support for a technology, especially like this, you know there’s real potential.

It’s important to note that for a game to look “cool” with 3D Vision, it doesn’t have to be natively supported. NVIDIA has recently been demoing Left 4 Dead 2 to show off the technology, for example, and that’s one game that doesn’t list support. When the first Left 4 Dead came out, I tested it out also with the 3D Vision, and though it took a few minutes to get used to, I did find it to add to the experience overall. 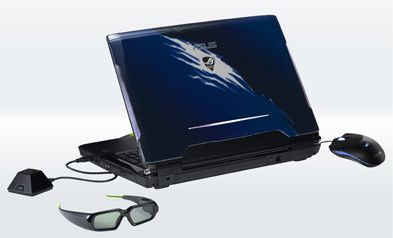