Although technologies such as solid-state storage have taken up a large portion of space around the various booths, Blu-ray is another that can be found all over the place. Even modest notebooks are starting to carry the capability for Blu-ray playback, and I’m all for it. It’s nice to be able to plug a notebook into your TV and watch HD content… nothing at all wrong with ultra-portable HD content.

With such focus on Blu-ray, it’s no surprise to see certain manufacturers showing off external drives, and one such company is ASUS. The SBC-04D1S-U (?!) is easily one of the best-looking external BD-ROM models on the market, and after having a quick look, I’ve decided that I want one. Oh, how I want one.

As you can see in the image below, the device (right) is not much bigger than the drive door, and looks entirely elegant with its glossy black finish and background blue LED (which can be turned off should you want to watch a movie with no distraction). The best part? It’s USB-based, so it can be used pretty-well anywhere. 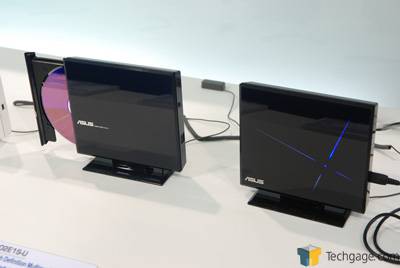 Aside from reading Blu-rays, it also writes them, believe it or not, in addition to having the ability to take advantage of most things DVD and CD. Overall, it’s a great all-around drive that looks good, is affordable (~$199 USD, so I’m told) and is very portable. The nicest feature is knowing that you’re not tied to only one PC, but any you come in contact with. These are available now, although I’ve been unable to spot them myself. If you have, let us know in the thread!