One of the cooler aspects of Computex is that at each turn, you may spot a product that causes you to exclaim, “neat!”, “cool!” or “innovative!”. For the most part, we have reason to be excited for a lot of these products, as they’re usually set to be launched in the marketplace not long after the conference. But then there are other products that almost assuredly will never see the light of day, but probably should.

A product that fits this bill is an ASUS motherboard with an interesting name, “Immensity”. At first glance, the board looks no different from any other high-end model, but once you look closer, you can see it’s actually unlike all the rest. Riddled around the board are a few chips that most others don’t have, especially together: Lucid’s Hydra multi-GPU processor and AMD’s Radeon HD 5770. 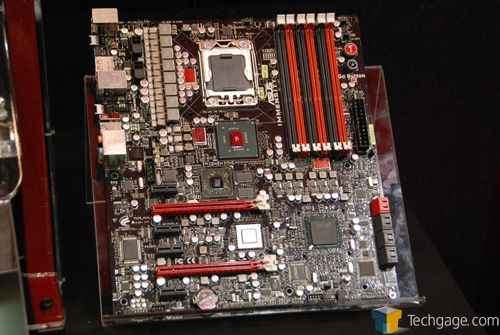 Seeing a Hydra chip on a motherboard isn’t that new, as MSI has been offering such a solution for a little while. But seeing a relatively high-end GPU such as the HD 5770 is certainly new, and makes this motherboard very, very interesting. Before I knew that the board featured the Hydra chip, I asked myself, “Who on earth would buy a high-end board and then use an HD 5770“, but that’s of course where Hydra comes into play.

Because Hydra allows you to combine random GPUs together, such as one from AMD and then one from NVIDIA, ASUS figures that if someone purchased this board, they could add in their last-generation GPU, or a current-generation to enable a CrossFireX kind of mode. It’s an interesting concept, but as this kind of solution is still set for a very niche audience, it’s very unlikely we’ll ever see the board come to market. I could be wrong though, and if I am, I’d love to get a hold one for testing…

For those interested, here’s a shot of the board with its heatsinks in tact.