Today’s desktop motherboards are more robust than ever, but have you ever purchased one and later regretted you didn’t opt for one with a greater feature-set? Yeah, probably not. But if you have, and that extra feature-set includes Quad-SLI, then ASUS’ ROG “Xpander” might be just for you. Well, as long as you own a Rampage III Extreme.

You see, because the motherboard is unable to handle four graphics cards at x16 speeds, Quad-SLI is not possible. Plus, there’s the issue that the slots don’t accompany it, either. To remedy the situation, ASUS came up with an add-on that’s a daughter board of sorts… it covers the entire bottom-half of the board, and adds about two inches of height.

The purpose, as mentioned, is to allow users of the RIIIE Quad-SLI support. Aside from the four full PCI-E x16 slots, this daughter board also includes the two required NF200 bridge chips, two Molex power connectors, and a fan… although I’m not quite sure what it’s cooling as none of the pictures give an ideal view of the underneath.

Because of the NF200 additions, and the required license for Quad-SLI support (as if the price of the NF200 chips wasn’t enough), $100 is added to the Xpander right there, so we could probably expect it to sell for around $150 or a bit more when it hits the market. No release date is known about, but we may learn more during Computex in two weeks time. 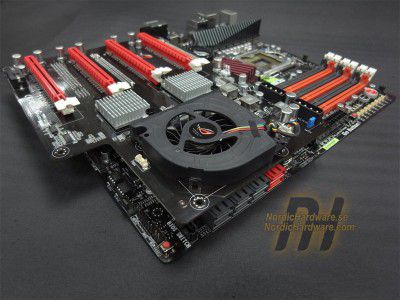 At the same time the Nvidia NF200 bridge chips adds 12W power consumption, each, which is actually more than some low-end graphics cards consume. On a positive note, no power will be taken from the motherboard, but all power comes through three 4-pins molex power connectors and one 6-pin PCIe connector.