Ever since ASUS first released its Xonar line-up of cards, I knew I had to have one. But, being that I use Linux as a primary OS, I knew that the chance of me finding good support was slim. Well, that support may have taken a couple of months in the beginning to come to fruition, but since then, the open-sourced ALSA drivers have come to support every Xonar model available, along with many of their specific features.

This past fall, I “upgraded” my Xonar D2X to an Essence STX (I use quotes because both cards are about equal in their awesomeness), and as I expected, the card worked just fine under Linux. One issue I did mention, though, was that the volume on the STX could reach levels impossible on the D2X… dangerous levels. Because this card is designed for headphones, it has a built-in amp, and I assumed the loudness was due to what was essentially the amp being set to max power by default.

Aside from that issue, though, the card offered an expected range of controls for both input and output, so all was well. Compared to Windows, I can’t find a real fault with the Linux driver. The sound is still pristine. But, that’s not to say that more control wouldn’t be appreciated. When I saw today that a brand-new version of the Linux kernel was made available (2.6.33), I downloaded it and upgraded. I didn’t expect to see much from a features standpoint (there was a lack of easy-to-understand information around the kernel when I upgraded, but that’s since changed), but I was surprised. 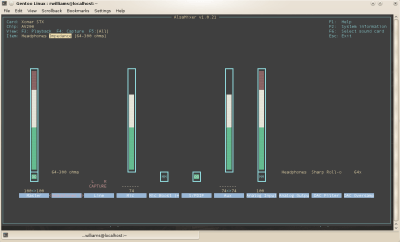 After I got back into my desktop, I decided to listen to some music, and noticed that in my mixer tool, KMix, the Xonar card was renamed from “Xonar Essence STX” to simply “Xonar STX” , and instead of a multitude of controls, there was just one… “Master Volume”. At first, I was concerned, but after using the ever-reliable ‘alsamixer’ CLI tool, I could see that there was definitely more functionality available than KMix lead me to believe, and surprisingly, there was also new functionality as well.

The first thing to catch my eye was the control over “headphone impedance”. That’s directly related to the on-board amp, and has three settings total: <64 ohms, 64-300 ohms and 300-600 ohms. Prior to this driver, I believe that the card was set to the latter setting at default, which was the reason it was way, way too loud (at least with my very low 40 ohms headphones) . For most people, the middle selection will be fine, but if you happen to have headphones with a higher impedance (300+ ohms), the setting is there.

In addition to control over the amp, control has also been added for the DAC, including the ability to switch from a sharp to slow roll-off, and also alter the oversampling rate from 64x to 128x. These options, along with the headphone impedance, have been available on the Windows driver since the Essence STX launch, but finally, audiophiles and audio enthusiasts alike can finally gain a bit more control under Linux.

Huge thanks once again to Clemens Ladisch, who has been the dedicated developer of the  open-sourced sound driver for ASUS Xonar cards since the beginning.