We don’t often feel compelled to talk about benchmarking we’re working on until it’s finished, but we know there are many who have been waiting on our look at performance in MAGIX Vegas Pro 17, so we wanted to take a moment to provide some updates. Ultimately, we hope to have something posted in the next couple of days, with the same tests seen in our Vegas Pro 16 look earlier this year.

We’re not professional users of Vegas Pro, so we don’t have a right to comment much on its usability, but in our limited use, the new version seems stable overall. If you load up the FX filters, you’ll see HitFilm options removed, but Color Grading, Mesh Warp, and Slow Motion added in. Some of the pre-existing FX have received their own updates though, so there’s more done under-the-hood than is immediately obvious here. 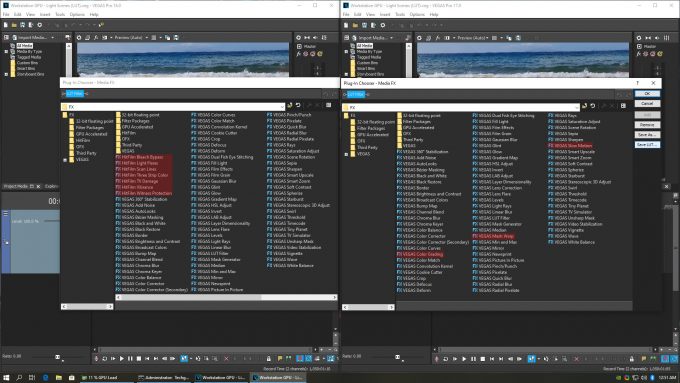 In our tests, Mesh Warp uses the GPU to decent effect, but not so much that it warrants its own test. Color Grading will use the GPU similarly to the LUT filter, which we will continue to have a test for. Slow Motion is almost entirely CPU-bound thanks to its analysis process, as the below screenshot highlights. 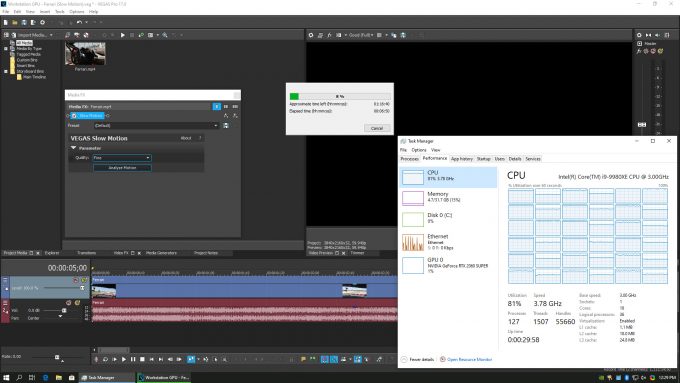 We were excited to see this heavy usage, since it meant Slow Motion might make for a good benchmark. However, after we saw the 8-core Intel Core i9-9900K prove twice as fast as the 18-core Core i9-9980XE, we decided to shelve the idea for now. You just need to know that it’s going to use your CPU heavily during its process, and on some CPUs and codecs, that process is going to take a while.

At the moment, AMD’s Radeon Navi decoder is not officially supported in Vegas Pro. You will get an error as you export using the usual VCE option. MAGIX is well aware of this issue, and was before VP17’s launch, but AMD’s and MAGIX’s development cycles didn’t perfectly align this go-around. We would not expect it to take too long to see support added. Navi users won’t be out-of-luck for exporting since the CPU-based options can be used in the meantime, but clearly, we wouldn’t recommend Navi for VP until it’s officially supported. 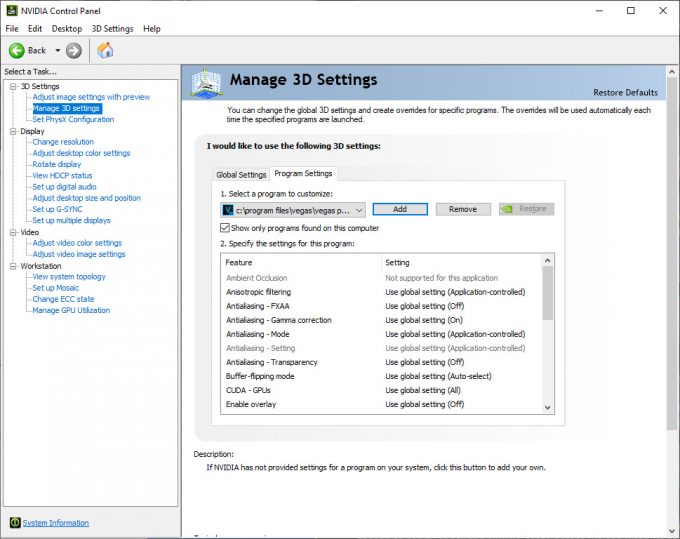 In a similar vein, we talked a bit in our Vegas Pro 16 look that for certain NVIDIA GPUs, Vegas Pro will need to be added inside of the NVIDIA Control Panel as an application. Unfortunately, this issue still exists, but in our testing, it only affects TITAN and Quadro, not GeForce at this time. If users do not add the profile, LUT playback in particular will be dramatically reduced, and Median will take a bit of a hit, as well.

After we completed all of the testing on ten NVIDIA GPUs, we realized that a new option exists in VP17 that enables hardware decoding through NVIDIA’s NVDEC API. We’re going to have to sanity check each one of these GPUs since we now know about this option (which defaults to Intel QSV), and see how it impacts playback performance.

But… after we finished our NVIDIA GPUs, MAGIX released a new build for VP17, 284 (from 261). We only found out because we had to download a fresh installer and happened to notice the build change. We will be sanity checking our already tested encodes because of this, as well.

As you can probably tell, benchmarking software can be a ton of monotonous fun! This article should have been up a week ago, but we’re just happy it’ll be up in the next few days. We’d rather it be late than to post and find out we tested something incorrectly.