Who doesn’t love looking at PCs that have been modded to the nines? I sure do, but I admit that I’m not one to go out and search for them, nor do I get that excited at reading through a billion page build log. Rather, I love seeing modded PC roundups, and like clockwork, UK tech site Bit-Tech has delivered, with a total of 18 amazing creations that it considers to be the best mods of the year.

Some of these PCs could be considered masterpieces, because the time and effort, and not to mention attention to detail, that has gone into them is simply incredible. Just looking at them makes me appreciate that a single article on our site doesn’t take half a year to create! The patience these modders have, and their passion, is constantly impressive to me.

All of the mods are good, but there are a couple that catch my eye. I’m a fan of the color purple, so “Purple Rain” appeals to me quite a bit. From afar, the PC looks like it might be of the mATX form factor, but it’s not. Rather, the chassis is a large box, and purple is splashed all over the outside and inside. In addition, lots of white-colored sleeving and water-cooling tubes are used, in addition to white fans. Overall, the entire PC looks wicked, almost sci-fi like.

Ever think of building a PC out of concrete? You’re lying if you said “yes”, but Dominic Heisse put his money where his mouth is and came through with one of the most interesting modded PCs I’ve ever seen. Where do you get a piece of concrete in the shape of a chassis? Nowhere. Rather, you build the frame and pour the concrete yourself! Now that’s an idea that rocks (bad pun)!

I just touched up on a mere two of the modded PCs featured here, so I’d recommend looking at Bit-Tech for the entire list, as some of them are just mind-blowing. I’ve never felt so ashamed of my default Cooler Master chassis… 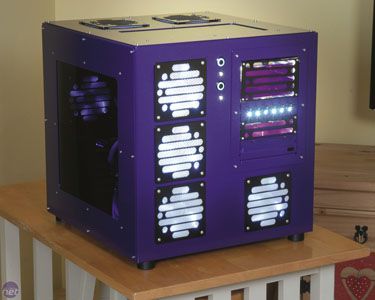 It’s been another epic year for modding on bit-tech. Our regular Mod of the Month articles have been jam-packed with dozens of fantastic projects, all of which showed huge potential. Some have been completed, others haven’t, and we’ve also found other projects lurking in our forums which we’ve featured on bit-tech, and in Custom PC magazine too.