It’s hard to believe that after the super-long wait for Blender 2.80 to arrive, that version has become old hat, as 2.81 has just been released. As usual, we’ll work to integrate 2.81 into our suite as quickly as possible, so we can see how performance scales between versions.

On the topic of performance, it seems that the biggest gains to be seen in 2.81 are with Intel’s Open Image Denoise for denoising (surprised?), and NVIDIA’s RTX and OptiX ray tracing engine for speeding up renders. We took a look NVIDIA’s take in-depth back in September, and saw ridiculous (in a good way) performance changes. As we integrate 2.81 into our testing, we’ll also look to expand to include RTX benchmarks in the relevant content (such as an upcoming ProViz performance look). 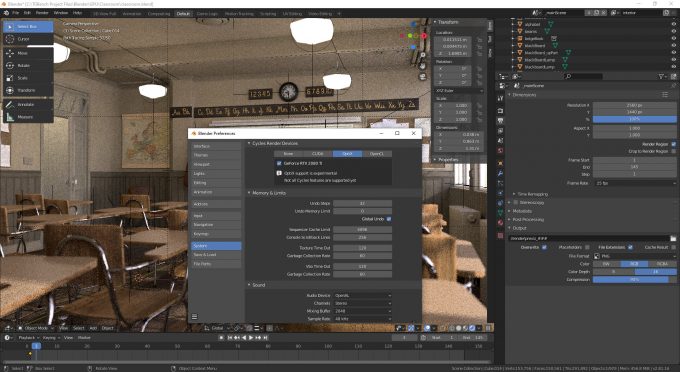 While NVIDIA GTX can stand in for certain RTX workloads, Cycles isn’t one of them. You will need an RTX card’s RT cores to speed things up, and not to mention recent drivers. Ideally, you’d be using the brand-new Studio driver that was just released, with focus of optimization for Blender 2.81, as well as the new V-Ray plugin, which also adds RTX support.

Here’s a performance example from our look at the alpha build of 2.81: 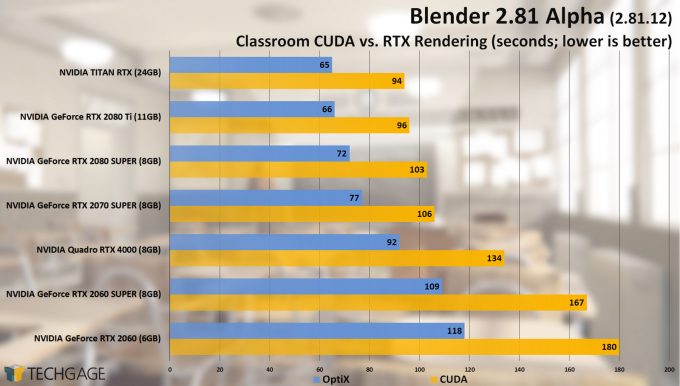 It’s easily seen here that RTX and OptiX can greatly improve rendering performance, something that wouldn’t just impact final renders, but also the viewport render mode. As we’ve found in the past, NVIDIA’s Turing architecture also powers the viewport quite well.

With Intel’s Open Image Denoise, modern CPUs equipped with SSE4.1 can be used to accelerate the denoising of a scene, allowing for really quick, but likely imperfect feedback (vs. an actual render). Coincidentally, we just added OID to our Linux CPU test suite, and have found that this is one particular workload where AVX-512 is put to good use: 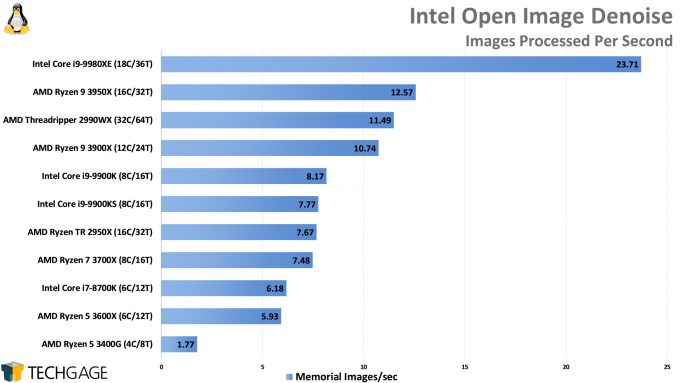 You can read all of what’s new to Blender 2.81 on the official release notes page. As mentioned above, we’ll integrate the latest version, along with RTX tests, into our benchmarking gauntlet soon. You can grab the 2.81 download from the usual spot.