Right on schedule, the Blender Foundation has released the latest major version of its popular design suite, Blender 3.1. As you’ve come to expect from Blender, there are many notable updates in this new release, but one of the biggest focal points is performance. If you love your processes to be faster all-around, then you’ll not want to waste time on upgrading to 3.1. That assumes you’re not glued to the LTS release, which still revolves around 2.93.

If you want a visual look at what’s new, we’d encourage checking out the official video above. From the performance perspective, mesh bounding has become a multi-threaded process, and subdivision surface modifiers now support GPU acceleration. Changes like these are important, because while fast rendering times are crucial, so too are interactions in the viewport – no one wants to work with stutter.

We’ve seen some efforts with recent Blender releases to improve file export times, and in 3.1, both OBJ and FBX export times have been dramatically improved – both to a mere fraction of what you’d see in 3.0. Even the image editor has seen major enhancement, allowing absolutely enormous files to be used without crippling slowdown. An example is given of a nearly 3 gigapixel image being used within it.

3.1 becomes the first Blender version to support Apple’s Metal API. Currently, you can use Cycles on M1-based computers using either the CPU or GPU, and also Apple’s Macs that include discrete AMD Radeon graphics cards. It’s important to note that this is the first release offering support, so performance out-of-the-gate is not likely where it could be, but Blender promises further improvements as development continues.

Even the asset browser, which debuted in 3.0, has seen performance improvements here, thanks to the help of indexing. We’ll take this moment to note that if you want to quickly engage with Blender’s asset browser, there are some new projects available over at the official Blender demo files page that will allow you to do that. You can see an example of the Ellie animated project below: 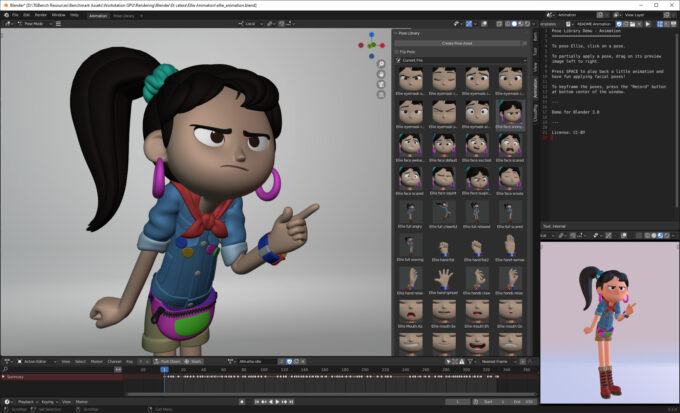 With this project, you can simply play the animation as-is, or change the pose and facial expression on-the-fly, and see those changes immediately applied in the viewport (and final export). The speed at which every change applies is really great, as is the ease-of-use. A second project, Cube Diorama, allows you to easily insert objects into a scene, and change their materials, so it’s also worth checking out.

Since Blender introduced geometry nodes, only a few versions ago, its developers have been pumping out new nodes to take advantage of, with 3.1 adding 19 more to the list. That includes Extrude, which has been much-anticipated by geometry node users. If you want to quickly check out the Extrude feature, you can grab a demo .blend from the 3.1 What’s New page.

As always, we’re only covering the (sub)surface here, so if you want all of the nitty gritty, you should check out the What’s New page linked just above. Considering that a new Blender releases every three months lately, we continue to be impressed by how much is accomplished in between each release.

We’re going to be taking a performance look at Blender 3.1 soon, although at this point, we can say that rendering and viewport performance hasn’t really changed much. That said, we do plan to get CPUs tested this go-around, with both a GeForce and Radeon card tested with one for heterogeneous rendering, since it’s been quite a while since we’ve seen how that stacks up. Stay tuned.