For a couple of reasons, one company that’s always worth checking out at CES is ASUS. One of the biggest reasons revolves around the fact that the company’s products are usually intriguing, but past that, it always manages to show something off I wasn’t expecting. This year, that “something” is the Transformer AiO.

About two years ago, when many companies were taking the safe way out and releasing a standard Android tablet, ASUS decided to bundle its original Transformer (TF101) with a dock. That in effect created a notebook / tablet hybrid. That implementation worked out quite well, and the company has carried on with it to this day. However, Android isn’t exactly ideal for a lot of people while on the go, and it’s really quite expensive to own both an Android and Windows tablet separately. The Transformer AiO helps take care of that, and even goes a step further. 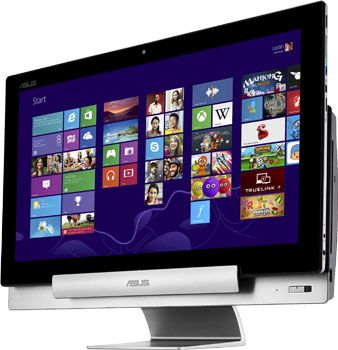 The Transformer AiO can be used at your desk like a normal PC, but for those who want to go lounge on the couch or elsewhere, it can be detached from its base and carried along. As most of the tablet’s hardware is found inside its base, this is a solution that’s designed for home or business use only – you can’t leave the house with it. Because of its ability to use more robust hardware, though, the Transformer AiO bundles in both Windows 8 and Android 4.1. That’s right – x86 and ARM architectures under the same hood.

The display / tablet comes in at 18.4-inches, so right off the bat, this isn’t something you’re going to want to just toss around like a standard tablet. For the Windows 8 side of things, an Intel Core processor can be found along with an NVIDIA GT 730M GPU. For some Android action, NVIDIA’s Tegra 3 steps up to the plate to take over. Both OSes can be switched between quickly with a dedicated button. There’s no word on the screen resolution, but judging by the shot above, I’d guess it to be 1080p.

ASUS is keeping mum on the pricing for the time-being, but has stated it’ll be available to consumers sometime this quarter.