Earlier in the week, I talked a bit about Kingston’s “gen 3” DataTraveler Ultimate 3.0 flash drive, noting that it’s quite a bit faster than the previous-gen in the read MB/s department. Little did I realize, I had a press release sitting in my packed inbox from Corsair, touting its “native USB 3.0” Voyager GT Turbo. Boy, do I regret missing this little gem until now, because it’s a beast where flash drives are concerned. 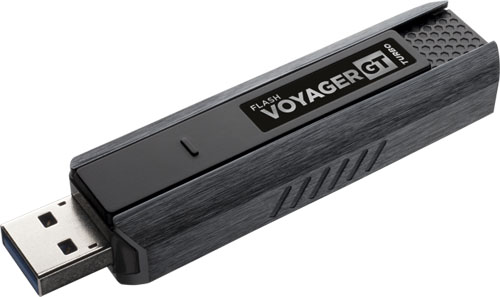 Because Corsair was able to introduce a native USB 3.0 controller inside of the flash drive, the bottleneck introduced with a USB 3.0-to-SATA converter has been avoided. This design allows the Voyager GT Turbo to reach speeds of up to 260MB/s read and 235MB/s writes. We’re talking SATA 3Gbit/s SSD-level performance here from a drive no larger than previous generation thumb drives. We’ve seen flash drives this fast before, but nothing close to this convenient form-factor.

With this drive announcement comes a special treat: its pricing (a blessing around CES time). Corsair will be charging a bit of a premium on its Voyager GT Turbo – no doubt due to what I’m sure is a more expensive controller – pricing its 32GB model at $49.99, the 64GB at $89.99 and the top-end 128GB at $179.99. All drives carry a five-year warranty. Want one? You’ll have to wait about a month. Given this performance, it looks to be worth the wait.